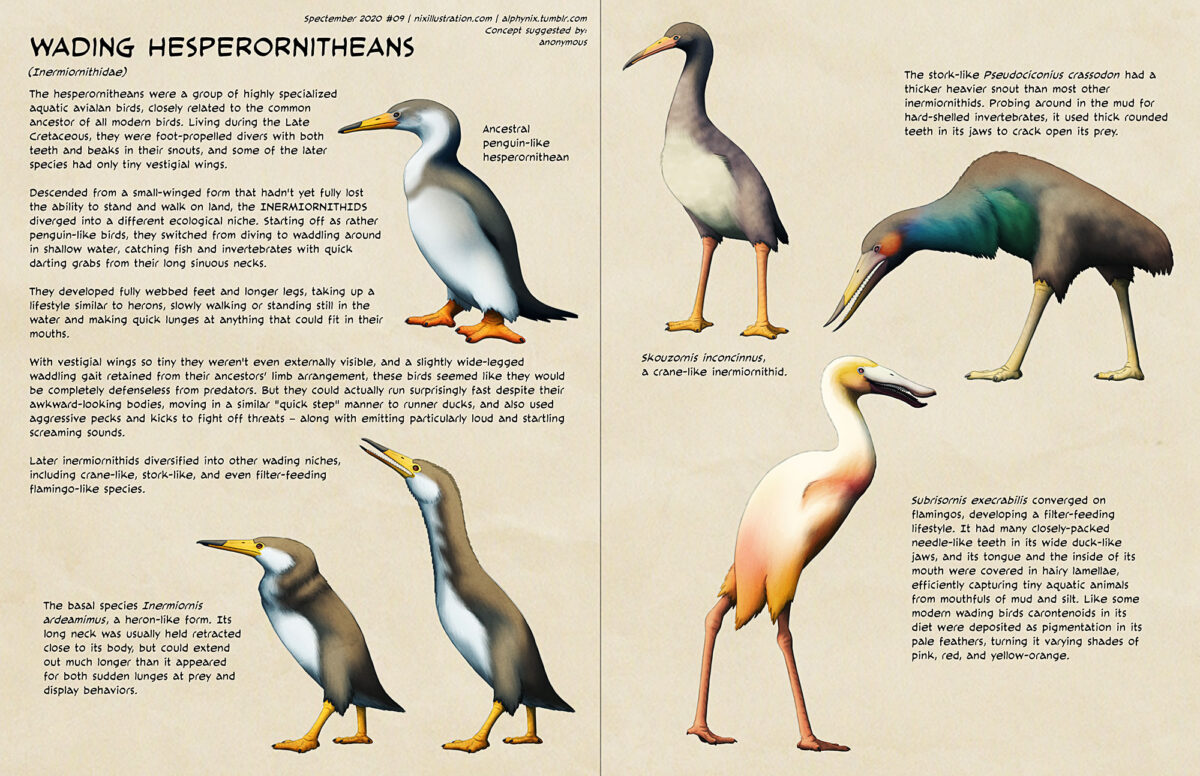 The hesperornitheans were a group of highly specialized aquatic avialan birds, closely related to the common ancestor of all modern birds. Living during the Late Cretaceous, they were foot-propelled divers with both teeth and beaks in their snouts, and some of the later species had only tiny vestigial wings.

Descended from a small-winged form that hadn’t yet fully lost the ability to stand and walk on land, the INERMIORNITHIDS diverged into a different ecological niche. Starting off as rather penguin-like birds, they switched from diving to waddling around in shallow water, catching fish and invertebrates with sudden darting strikes from their long sinuous necks.

[Image: a hesperornithean bird standing up in a rather penguin-like manner, with its feet splayed slightly out to each side. It has a long pointed snout with a beak at the front and teeth further back, an s-curved neck, and vestigial wings that are barely visible under its thick feathers.]
Ancestral penguin-like hesperornithean

They developed fully webbed feet and longer legs, taking up a lifestyle similar to herons, slowly walking or standing still in the water and making quick lunges at anything that could fit in their mouths.

With vestigial wings so tiny they weren’t even externally visible, and a slightly wide-legged waddling gait retained from their ancestors’ limb arrangement, these birds seemed like they would be completely defenceless from predators. But they could actually run surprisingly fast despite their awkward-looking bodies, moving in a similar “quick step” manner to runner ducks, and also used aggressive pecks and kicks to fight off threats – along with emitting particularly loud and startling screaming sounds.

Later inermiornithids diversified into other wading niches, including crane-like, stork-like, and even filter-feeding flamingo-like species.

[Image: two images of a heron-like wading hesperornithean, with slightly longer legs and no visible wings. In the first image its head is tucked up close to its body; in the second it has extended its neck out and opened its mouth to show its teeth.]
The basal species Inermiornis ardeamimus, a heron-like form. Its long neck was usually held retracted close to its body, but could extend out much longer than it appeared for both sudden lunges at prey and display behaviors.

[Image: a crane-like wading hesperornithean with a long neck, long legs, and a slight downward curve to its snout.]
Skouzornis inconcinnus, a crane-like inermiornithid.

[Image: a stork-like wading hesperornithean with a long neck, and long legs. It has a thicker snout with a slight upward curve at the beak tip, and rounded crushing teeth.]
The stork-like Pseudociconius crassodon had a thicker heavier snout than most other inermiornithids. Probing around in the mud for hard-shelled invertebrates, it used thick rounded teeth in its jaws to crack open its prey.

[Image: a vaguely flamingo-like wading hesperornithean with a long neck, even longer legs, and a slightly more upright posture than the others. It has a wide duck-like snout full of many closely-packed needle-like teeth that act as a filtration system. It is a cursed-looking bird.]
Subrisornis execrabilis converged on flamingos, developing a filter-feeding lifestyle. It had many closely-packed needle-like teeth in its wide duck-like jaws, and its tongue and the inside of its mouth were covered in hairy lamellae, efficiently capturing tiny aquatic animals from mouthfuls of mud and silt. Like some modern wading birds carontenoids in its diet were deposited as pigmentation in its pale feathers, turning it varying shades of pink, red, and yellow-orange.