The earliest baleen whales didn’t actually have any baleen plates in their mouths, and the evolutionary origin of these unique filter-feeding structures is still poorly understood.

It was thought to have been a fairly simple linear process from toothed ancestors to a mix of teeth and baleen and then to fully toothless with just baleen, but more recent discoveries have begun to cast doubt on that idea. The teeth of ancestral baleen whales weren’t suited to filter-feeding at all, instead still being adapted for predatory piercing and chewing – actions which would have been constantly interfering with and damaging any proto-baleen forming alongside them, and making it seem much more unlikely that there would have ever been a transitional form that had both teeth and baleen at the same time.

But then how did baleen whales get their baleen?

Maiabalaena nesbittae here provides a possible solution. Discovered in Oregon, USA, this early baleen whale dates to the early Oligocene, around 33 million years ago, and compared to most of its modern relatives it was comparatively tiny, only about 4.6m long (15′).

And it had no teeth at all, but possibly also no baleen.

Baleen rarely fossilizes, so it’s unclear whether Maiabalaena actually had any or not, but the shape of its skull suggests it probably didn’t – it lacked the broad thickened upper jaw associated with supporting racks of baleen plates. It instead seems to have been adapted for suction feeding similar to modern belugas and beaked whales, using muscular cheeks and tongue to manipulate water pressure and pull small prey like fish and squid straight into its mouth.

Since it lived at a time when the Antarctic Circumpolar Current was forming and cooling the oceans, changing ecosystems and prey availability, it may represent a previously unknown stage in baleen whale evolution – a point when they’d moved towards specializing for suction feeding and lost their teeth entirely, before transitioning again over to filter-feeding with baleen in a completely separate evolutionary development a few million years later. 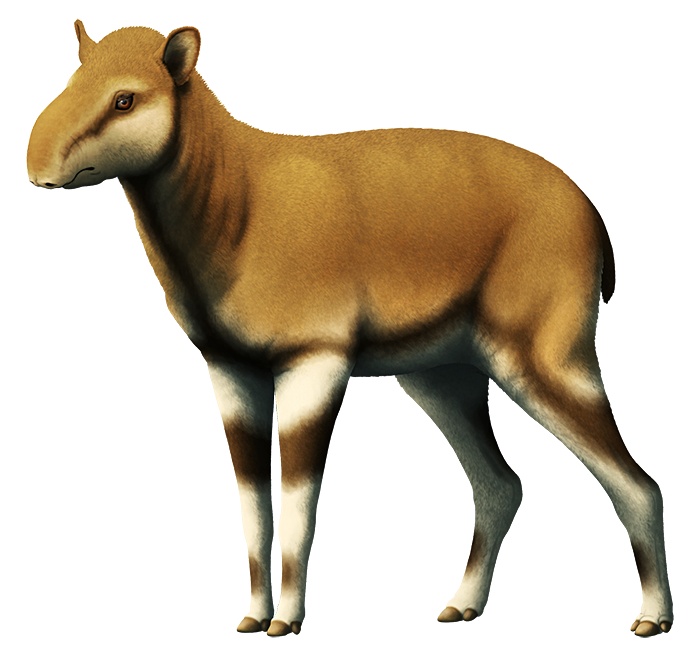 Pseudosuchians – the evolutionary lineage whose only surviving modern representatives are crocodilians – first originated in the early Triassic and were once an incredibly diverse group. These croc-relatives experimented with fully erect limbs and bipedalism quite a few separate times, and on several occasions ended up evolving remarkably similar body plans to their distant cousins the theropod dinosaurs.

One of the earliest branches of the pseudosuchians to do this were the ornithosuchids, the best known of which is Riojasuchus tenuisceps here.

Living in Argentina during the Late Triassic, about 217-215 million years ago, Riojasuchus had a distinctive “hooked” upper jaw and two rows of osteoderm armor plates along its back.

It was only around 1.5m long (4’9″), much smaller than some of the other pseudosuchians and early theropod dinosaurs it lived alongside. Its front limbs were shorter than its hind limbs and it was probably a facultative biped – moving slowly on all fours, but getting up on just its hind legs for bursts of high speed running – which would have helped it avoid being eaten by those larger predators.

Like other ornithosuchids it had very strange ankles, with the bones in the joint articulating with each other the opposite way around compared to any other type of archosaur. The claws on its hind feet were also unusually tall and narrow, especially on the inner toes.

Its jaws were capable of delivering strong but somewhat slow bites, and the relative structural weakness of its narrow notched jaw would have made it difficult for it to deal with large struggling prey. It likely mostly hunted smaller vertebrates, and may also have been an opportunistic scavenger taking bites out of larger predators’ kills whenever it got the chance.