Cetotheres were a group of small baleen whales, one of three major lineages of these cetaceans alongside the rorquals and the right whales. They first appeared in the fossil record in the mid-Miocene, about 14 million years ago (but are estimated to have actually originated 10-15 million years earlier), and disappeared during the Pleistocene about 2 million years ago.

First recognized in the mid-19th century, for a long time the cetotheres were used as a wastebasket for all fossil baleen whales that didn’t clearly fit into any modern whale families. By the start of the 21st century nearly 30 different genera representing numerous different species were all lumped into the group – and the genus Cetotherium was another wastebasket in itself with at least 12 assigned species, many of which were based on fragmentary or dubious remains.

This was finally cleaned up in the 2000s, when a revision of the cetotheres cut the group down to just 6 genera. Since then a handful of additional new genera and species have been named, and while a few polyphyletic Cetotherium species may still need tidying up the cetotheres have overall gone from being a total taxonomic mess to actually being one of the best studied groups of fossil baleen whales.

Their exact evolutionary relationships with each other are still in flux, but the most surprising discovery from the improved understanding of these ancient whales is that they might not be extinct after all.

A study in the early 2010s suggested that the pygmy right whale may actually be a living cetothere. This classification was initially controversial, but further discoveries of fossil relatives of this enigmatic modern whale and comparisons of their distinctive inner ear anatomy have provided stronger evidence for an evolutionary link.

At this point it seems fairly likely that the pygmy right whale really is either the last surviving representative of the cetothere lineage, or at least is a very close evolutionary “cousin” (a “cetotherioid”) closer related to them than to any other modern baleen whales. 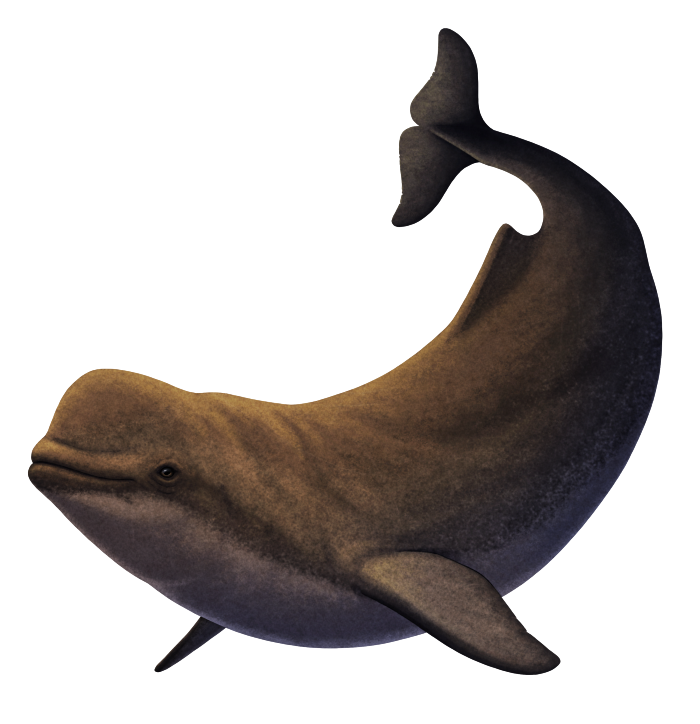 Modern mysticete whales all have baleen plates in their mouths, but before the evolution of these specialized filter-feeding structures the early members of their lineage still had toothy jaws.

Borealodon osedax here was one of those “toothed mysticetes”, living about 30-28 million years ago during the mid-Oligocene off the coast of Washington state, USA.

Unlike modern baleen whales it was small, about the size of a modern porpoise at around 2m long (6’6″), and the wear on its multi-cusped teeth suggest it was a predator taking slicing bites of fish – possibly using suction-assisted feeding like its close relatives the aetiocetids.

Its fossilized remains are also a rare example of an ancient whale fall, with characteristic bore holes in its bones from Osedax worms.

The protocetids were some of the first oceanic cetaceans, occupying a transitional position in the evolution of whales, with four paddle-like limbs and nostrils only partway up their snouts.

Early members of this group swam like otters, using a combination of undulating their bodies and paddling with large hind limbs, but somewhere in the Late Eocene they switched over to propelling themselves entirely with their tails and gave rise to even more whale-like forms like the basilosaurids.

And Aegicetus gehennae was right in the middle of that switch.

Discovered in the Wadi Al-Hitan (“Valley of the Whales”) fossil site in Egypt, Aegicetus lived around 37-35 million years ago. It was similarly-sized to earlier protocetids like Georgiacetus, measuring about 3.5m long (11’6″), but its hind limbs were proportionally smaller. Its hips were also completely disconnected from its vertebrae, giving it much more flexibility to undulate its body and tail – and preventing it from supporting its weight on land, suggesting that it spent its entire life in the water.

It wasn’t a direct ancestor to more “advanced” cetaceans, since it lived alongside several species of basilosaurids. Instead it seems to represent a late-surviving example of what the earlier protocetid-basilosaurid transitional forms would have looked like.

An unnamed Cerro Ballena rorqual whale and the long-necked seal Acrophoca, from “How the Andes Mountains Might Have Killed a Bunch of Whales”
https://www.youtube.com/watch?v=iNk6r5WljGc

Since the last couple of weeks have featured marine mammals, let’s have one more! This time not a cetacean but a member of the other group of fully aquatic mammals still alive today: the sirenians.

Although commonly known as “sea-cows” due to their herbivorous grazing habits, sirenians’ closest living relatives are actually modern elephants. They’re thought to have originated in Africa over 50 million years ago, starting off as pig-like or hippo-like semi-aquatic animals — but they must have been good swimmers capable of crossing oceans very early in their evolutionary history, since some of the earliest known sirenian fossils actually come from the other side of the Atlantic on the Caribbean island of Jamaica.

Sobrarbesiren cardieli here extends some of our knowledge of early four-legged sirenians to Europe, dating to the mid-Eocene about 42 million years ago. Hundreds of bones were found in Northeastern Spain, representing at least six different individuals and giving us a fairly complete idea of this species’ anatomy.

It was smaller than modern sea-cows, reaching about 2m long (6’6″), and seems to represent a transitional point between the semi-aquatic ancestral sirenians and fully aquatic later forms. It had a head very similar to its modern relatives, and probably a tail fin, but also still retained small functional hind limbs.

It was initially thought to still be somewhat semi-aquatic and capable of quadrupedal locomotion on land, but a later analysis of its hind limb bones suggests that it may actually have been much more aquatic than that. Its hind legs had a wide range of motion and were probably used for otter-like swimming, undulating the body while paddling, but might not have been capable of supporting its weight on land. So if Sobrarbesiren did still haul out of the water, it may have had to move more like a seal.