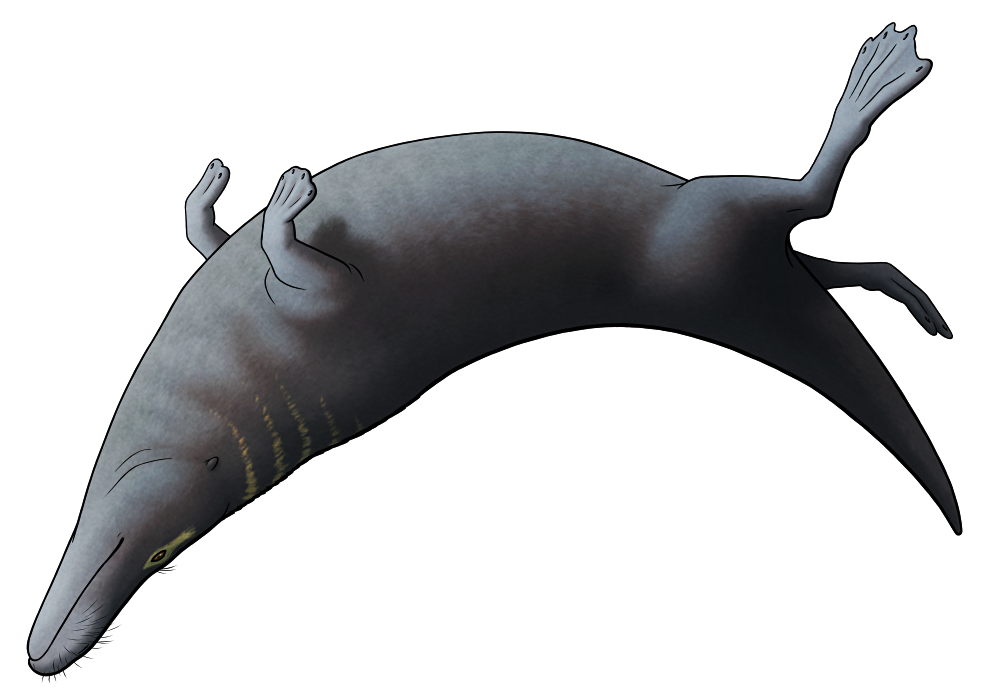 The protocetids were some of the first oceanic cetaceans, occupying a transitional position in the evolution of whales, with four paddle-like limbs and nostrils only partway up their snouts.

Early members of this group swam like otters, using a combination of undulating their bodies and paddling with large hind limbs, but somewhere in the Late Eocene they switched over to propelling themselves entirely with their tails and gave rise to even more whale-like forms like the basilosaurids.

And Aegicetus gehennae was right in the middle of that switch.

Discovered in the Wadi Al-Hitan (“Valley of the Whales”) fossil site in Egypt, Aegicetus lived around 37-35 million years ago. It was similarly-sized to earlier protocetids like Georgiacetus, measuring about 3.5m long (11’6″), but its hind limbs were proportionally smaller. Its hips were also completely disconnected from its vertebrae, giving it much more flexibility to undulate its body and tail – and preventing it from supporting its weight on land, suggesting that it spent its entire life in the water.

It wasn’t a direct ancestor to more “advanced” cetaceans, since it lived alongside several species of basilosaurids. Instead it seems to represent a late-surviving example of what the earlier protocetid-basilosaurid transitional forms would have looked like.

Remingtonocetids were an early branch of the whale evolutionary family tree, known from about 49-41 million years ago and splitting off somewhere between the famous “walking whale” Ambulocetus and the more oceanic protocetids. With otter-like bodies, tiny eyes, and long gharial-like snouts, they lived in near-shore shallow marine habitats and probably swam using a combination of their hind feet and tails.

They were initially found only in Pakistan and India, but then Rayanistes afer here was discovered all the way over in Egypt – suggesting that these early whales were much more widespread than previously thought, dispersing through the Tethys Sea at about the same time as their protocetid cousins.

Dating to the Middle Eocene (~45-41 mya), Rayanistes was probably about 2.5m long (8′2”). It had powerful hindlimb musculature that would have given it a very strong kicking swimming stroke, but it probably couldn’t actually support its own weight on land since its femur wasn’t very well anchored into its pelvis.

Ambulocetus natans, the Eocene “walking whale” – who might not actually have been able to walk at all!

A study published in 2016 suggests this early cetacean was actually fully aquatic and unable to support its own weight on land. So here’s an updated version compared to the Ambulocetus I did a couple of years ago.