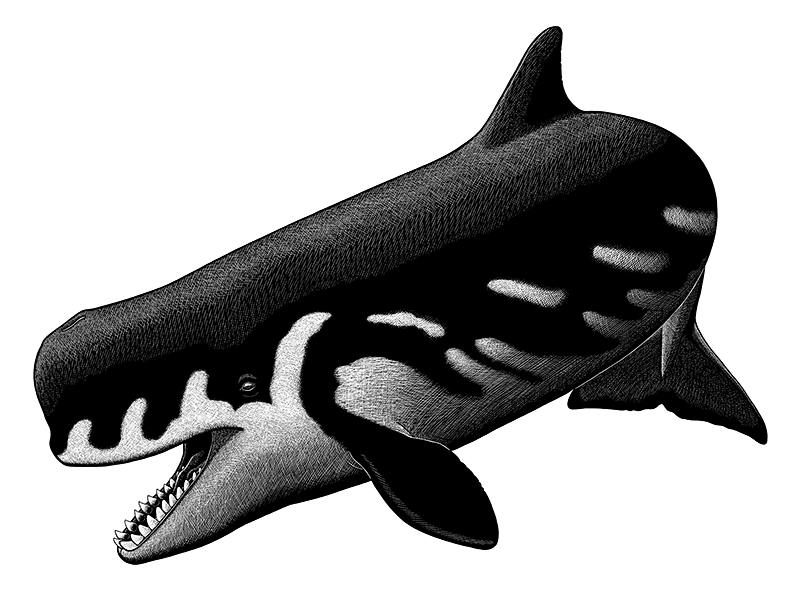 While most modern toothed whales have jaws full of teeth that are all the same simple pointed shape – an adaptation for better holding onto slippery prey – their ancient ancestors had teeth much more like other mammals, with differentiated incisors, canines, and molars.

In-between them were whales like Inticetus vertizi, which lived off the coast of southwestern Peru during the Early Miocene, about 18 million years ago.

At over 3.5m long (11′6″) it was one of the larger known toothed whales around at the time, but it wasn’t the direct ancestor of any living whales. Instead it was more of an evolutionary “cousin” to them, part of an older offshoot lineage that lived alongside the early members of modern toothed whale groups.

Inticetus had a long and unusually wide-based snout, somewhat croc-like in appearance, with sharp pointed teeth at the front and multi-lobed cheek teeth further back. A lack of obvious wear on its back teeth suggests it wasn’t using them to chew up its food, and it may have had a fairly specialized diet – possibly using those back teeth to sieve small prey out of the water in a similar manner to modern lobodontine seals.

Inticetus-like teeth have also been found in Miocene-aged deposits in the eastern USA, the Atlantic coast of France, and southeast Italy, indicating that this ancient whale lineage was quite widespread.