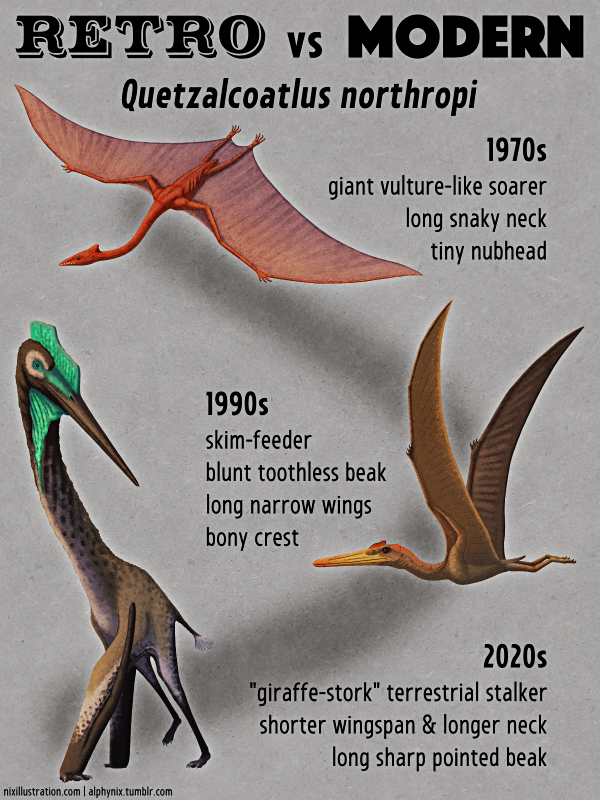 Named after an Aztec deity and often called “the largest animal to ever fly”, Quetzalcoatlus northropi is probably the most famous large pterosaur after Pteranodon – but despite its popularity for a long time we actually knew very little about it.

Discovered in Texas in the United States during the early 1970s, the first known fossils of Quetzalcoatlus were just a few giant wing bones, along with several partial skeletons of smaller individuals which at the time were thought to be juveniles.

But although it was given its charismatic name in 1975, the fragmentary nature of the find and it only being given a brief non-formal description meant it was very poorly understood at the time. Worse, the known fossil material was notoriously difficult for other paleontologists to study for several decades afterwards, with the museum housing it often refusing access requests entirely or demanding promises of total secrecy from anyone who was actually allowed to see it.

Most pterosaurs at the time were thought to be soaring seabird-like fish-eaters, but this huge species had been discovered in an inland environment. So Quetzalcoatlus was interpreted as being a huge vulture-like scavenger, with early reconstructions based on this idea ending up highly speculative due to the lack of good anatomical information. A common paleoart meme in the 1970s and 1980s depicted it with a long snake-like neck, a bizarrely tiny head, snaggly teeth, and a small nub-like crest.

In the mid-1980s Quetzalcoatlus was recognized as belonging to the newly-discovered azhdarchid lineage, a group with extremely long necks, toothless beaks, and long legs – although these pterosaurs were also rather poorly-known until more complete specimens were found in the mid-to-late 1990s.

Reconstructions during this period were considerably less demonic, reflecting the changing ideas about pterosaurs at the time. Quetzalcoatlus became sleeker and more bird-like, depicted with long narrow wing membranes, its neck held in an S-curve, its legs sticking out straight behind it in flight, and sometimes pycnofiber fuzz on parts of its body.

(…And sometimes there was excessive shrinkwrapping.)

During the early 1990s Quetzalcoatlus was also often shown with a blunt chunky beak based on fossil jaws found in west Texas, but in 1996 these remains were determined to belong to a different pterosaur. At the same time more material of the “juveniles” suggested they actually represented an entire second species of Quetzalcoatlus, about half the size of Quetzalcoatlus northropi, with partial skulls showing evidence of a bony crest on the head.

Quetzalcoatlus was also interpreted as a skim-feeder during this time, thought to fly along just above bodies of water with its lower jaw trawling over the surface, snapping up any fish it contacted.

The skimming hypothesis was widely accepted until 2007, when a detailed study showed that it was physically impossible for any pterosaurs to have actually fed that way. Based on their anatomy and known habitats azhdarchids like Quetzalcoatlus were subsequently reinterpreted as highly terrestrial predators, spending a lot of their time stalking around on all fours snagging prey in their huge beaks like a stork with the proportions of a giraffe.

A full technical description of the known fossil material had been promised since the early 1980s, but decades had passed and by the 2010s it still hadn’t been published. The specimens continued to be inaccessible, information was still under heavy embargo, and what little had been published in the 1970s and 1990s was argued to be sparse enough and undiagnostic enough that it was starting to be genuinely unclear if Quetzalcoatlus northropi was even a valid species name at all.

Finally, finally, after over 40 years, a whole collection of papers about this pterosaur were released in 2021 – and in a refreshing contrast to the many years of secrecy and hoarding they were all free and open access. The second species finally got a name, Quetzalcoatlus lawsoni, and the genus as a whole is now properly and officially defined, instantly going from dubious and almost unknown to one of the most complete azhdarchids so far.

The study isn’t without its issues or controversy, particularly in regards to some of its retro-seeming interpretations of Quetzalcoatlus’ posture, proportions, and launch mechanics. But since the publication means that the fossils are finally unrestricted to other researchers, there’s probably going to be plenty more studies and arguments and new discoveries about it in the future.

While Quetzalcoatlus northropi is still only known from fragments, the new knowledge about its smaller relative means we now have a much better idea of what it was probably like. It lived at the very end of the Cretaceous period, about 68-66 million years ago, and is currently known just from Texas – but it probably ranged much further than that, since azhdarchids are thought to have been able to fly for potentially thousands of kilometers at a time using energy-efficient thermal soaring.

It was one of the largest animals known to have been capable of powered flight, but not necessarily the largest ever. Some past Quetzalcoatlus wingspan estimates got ridiculously over-enthusiastically huge, in some cases up to to 21m (69′), but modern estimates based on better knowledge of azhdarchid proportions suggest something shorter-winged and much closer to 10m (33′) – and some other azhdarchids are now thought to have had similar or possibly even slightly larger wingspans.

Still, Quetzalcoatlus was very big, and when standing on all fours it was probably similar in size and shape to a modern giraffe, about 6m tall (~20′) with at least half of its height just being its neck. It had limb proportions more like an ungulate mammal than most other pterosaurs, suggesting it was highly adapted for walking and running around on the ground – but it could also catapult itself up into the air using its powerful forelimbs to take flight.

It would have been a ground-stalking predator similar to some modern storks and ground hornbills, using its long sharply pointed beak to snatch up any smaller animals it could fit into its mouth. Since its Texan habitat was a semi-arid “fern prairie” dominated by the titanosaur Alamosaurus, hatchlings and small juveniles of this sauropod may have made up a major part of Quetzalcoatlus’ diet.