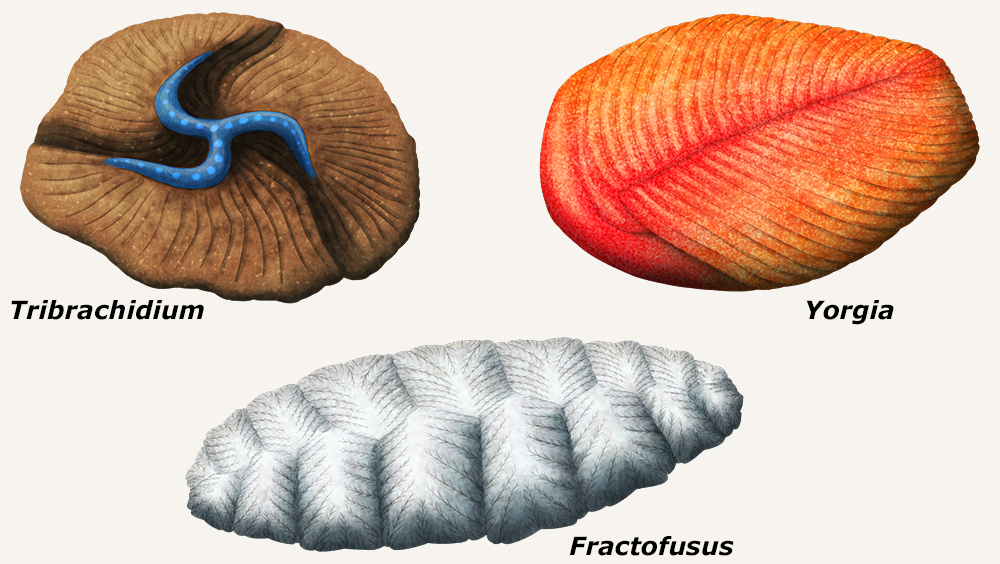 Although Precambrian fossils have been known since the mid-1800s, the overwhelming belief among 19th and early 20th century scientists that complex life couldn’t have originated that early meant such discoveries either weren’t taken seriously or were forcibly assigned to a Cambrian age. It wasn’t until the discovery of Charnia in the 1950s that views began to change.

(Or, rather, the second discovery of Charnia, since the schoolgirl who first found it wasn’t taken seriously either.)

Since then, a wide variety of strange soft-bodied fossils have been identified from over 30 different localities around the world, on every continent except Antarctica, dating to ages from over 600 to 542 million years ago. They’re now known as the Ediacaran biota, after the Ediacara Hills in Australia where some of the most famous examples have been found.

A few show possible similarities to known groups, but we still don’t know what sort of lifeforms most of them they actually were. Animals, fungi, algae, foraminifera, microbial colonies, or lichens have all been proposed – but they might also belong to a completely unique kingdom or phylum, a “failed experiment” in multicellular life with no living descendants.

And they’re gradually turning out to be not nearly as “simple” as once thought, showing evidence of their own thriving ecosystems and evolutionary specializations – which makes their sudden disappearance at the end of the Ediacaran Period all the more mysterious.

Tribrachidium has been found in Australia, Ukraine, and Russia (558-555 mya), grew up to 5cm in diameter (2″), and shows unusual tri-radial symmetry. Affinities to both cnidarians and echinoderms have been suggested, but no classification has really stuck. Recent 3D modelling and fluid dynamic studies reveal its shape was adapted to direct water currents into the nooks between its “arms”, allowing it to feed on suspended organic particles.

Yorgia is known from Australia and Russia (~555 mya), and appears to be a transitional form between two other ediacarans, Dickinsonia and Spriggina. It has what appears to be a “head” end with an asymmetrical lobe, and a segmented body in a glide reflection pattern, growing up to 25cm long (10″). Trace fossils from its feeding strategy have also been found – chains of imprints over seafloor microbial mats, where it moved from spot to spot and “grazed” with the entire underside of its body.

Fractofusus is somewhat older (575-560 mya) and perhaps even stranger. Discovered in Canada in 1967, it was known only as “the spindle organism” for 40 years before being finally named in 2007. Its 40cm long form (16″) shows fractal self-similarity, made up of frond-like elements that branch even further again and again and again, creating a large surface area relative to its internal volume that may have been used to directly absorb nutrients from the surrounding seawater. It also seems to have been capable of reproducing in two different ways – producing both water-borne offspring and stolon-like clones of itself.