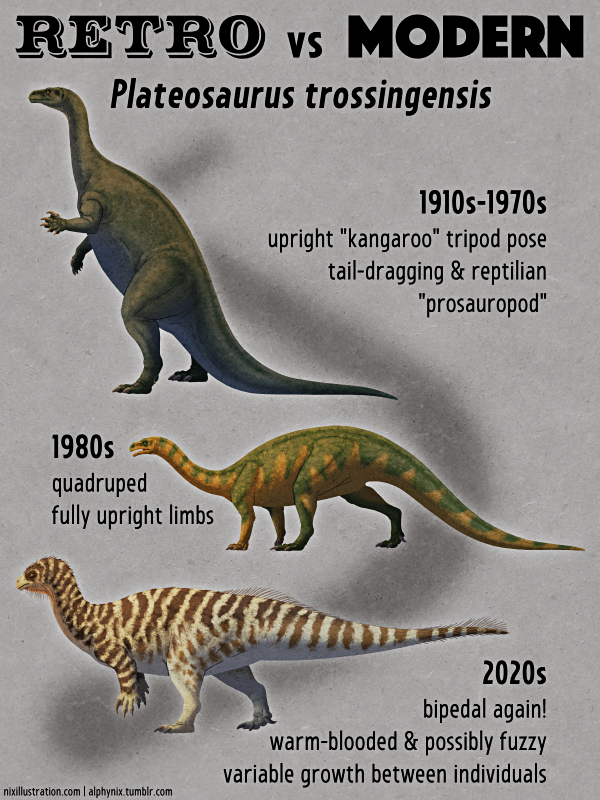 First discovered in southeast Germany in the 1930s, Plateosaurus was only the fifth non-avian dinosaur known to science – but its fossils were fragmentary and poorly understood until the early 20th century, when large bonebeds full of much better specimens began to be excavated.

Between the 1910s and 1930s around 80 near-complete skeletons of Plateosaurus were found in two German quarries, quickly making it one of the most abundant and best known dinosaur species of the time. Although it had previously been classified as a theropod dinosaur, in the 1920s the more complete material allowed it to be properly identified as a “prosauropod“, an early herbivorous relative of the giant sauropods.

Like many bipedal dinosaurs during this period Plateosaurus was generally interpreted as having an upright kangaroo-like posture with a dragging tail – although some paleontologists were arguing for it having a sprawling quadrupedal lizard-like stance as late as the mid-1930s.

Unfortunately much of the German fossil material was destroyed during World War II bombing raids, and interest in Plateosaurus didn’t pick up again until the time of the Dinosaur Renaissance when a third major fossil site was discovered in Switzerland during the 1970s.

Plateosaurus was reinterpreted with a horizontal body posture and fully upright limbs. As an early member of the sauropodomorph lineage it was often depicted as a transitional form between bipedal ancestral dinosaurs and the later quadrupedal sauropods, thought to primarily walk on all fours but also able to run on its hind legs like a hadrosaur – although some studies instead concluded it was fully quadrupedal with a downwards-curling tail that made bipedal movement impossible.

The large numbers of skeletons found together were considered to represent evidence for herding behavior, with groups of Plateosaurus being caught in catastrophic mudflows all at once.

Extensive biomechanical studies in the 2000s and early 2010s clarified what sort of posture Plateosaurus was really capable of. It was found to be completely unable to position its arms in a quadrupedal stance, and so was actually purely bipedal – and skeletons that had been mounted in the quadrupedal position had needed many of their joints to be completely dislocated to achieve the pose!

A huge number of different Plateosaurus species had been named over the genus’ nearly-200-years of history, too, creating a confusing mess of dubious and invalid names. These were all finally revised in 2019 leaving just three valid species, with Plateosaurus trossingensis as the best known and the new type species.

We now know Plateosaurus lived across central and northern Europe during the Late Triassic, around 214-204 million years ago, at a time when the region had a subtropical climate. It had a small head on a long flexible neck, with teeth convergently resembling those of modern iguanas suggesting it was probably primarily herbivorous (with possible opportunistic omnivory). Its arms were proportionally short for a prosauropod but were well-adapted for grasping, with large claws that may have been used to dig up roots and tear down branches

It had a rapid growth rate and bird-like lungs and air sacs that suggest it was warm-blooded, and different individuals showed an unusually high amount of variation in adult size and age of maturity. Some appear to have been fully grown at about 5m long (~16′) and as young as 12 years old, while others reached 10m long (~33′), and were still growing at 27 years old.

The bonebeds are no longer thought to represent mass mortalities of herds, but instead were probably a scenario more similar to the La Brea Tar Pits – mud-miring traps that smaller lighter animals could escape from but larger individuals became stuck and died.

No prosauropod skin impressions have been found yet, so it’s still unknown whether Plateosaurus was scaly like later sauropods or if it had some degree of protofeather hair-like fuzz.