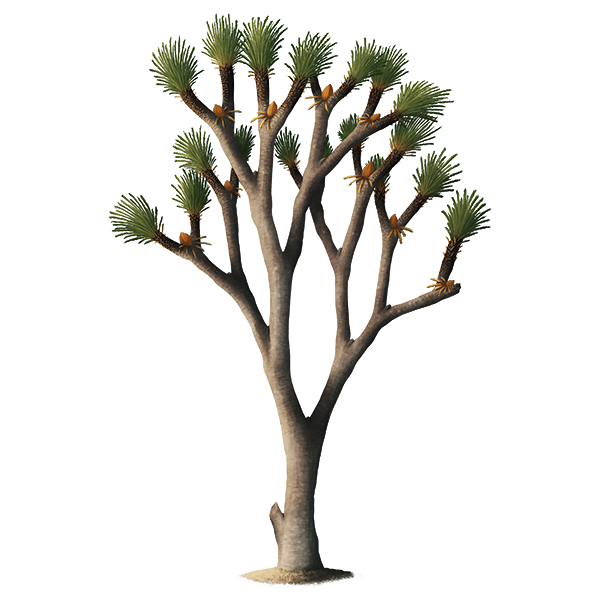 The Bennettitales were a group of seed-bearing plants found all around the world during the Mesozoic. They were an incredibly important part of ancient ecosystems, dominating the mid-level vegetation during the Jurassic and Early Cretaceous and making up over a third of the known plant species in some places. They came in two main varieties: the stocky cycad-like Cycadeoidaceae, mostly found in the northern continents; and the more slender branching tree-like Williamsoniaceae, which were more globally distributed. Most seem to have been around 2m tall (6′6″), but some may have reached much larger maximum sizes, perhaps as much as 15-25m (~49′-82′).

They date back to at least the Late Triassic (~230 mya), but they were already so diverse and numerous at that time that they probably originated much earlier – and very similar-looking leaves from the Permian and the Carboniferous hint that these plants may have actually first appeared at least 300 million years ago.

Their exact evolutionary relationships are still under dispute, with different paleobotanists classifying them as different types of seed-bearing plant. They’ve been traditionally placed close to the cycads due to their leaf shapes and growth patterns, but these similarities might be convergent since their complex flower-like reproductive structures and stomata instead suggest a possible evolutionary link to angiosperms or gnetophytes or “seed-ferns”.

The “flowers” of the bennettitaleans were round cup-like structures (sometimes resembling artichokes) which didn’t actually ever open up. While this would have made it very easy for them to self-pollinate, they may also have been some of the first plants to experiment with a mutualistic relationship with insects for pollination, possibly even partnering with early cupedid beetles in a similar manner to modern figs and their wasps.

Towards the end of the Cretaceous the rise of the true flowering plants seems to have started to send the bennettitaleans into decline, and the Cretaceous-Paleogene mass extinction at first appeared to have finished them off entirely. While there are a few Paleocene and Eocene-aged fossils that might be bennettitalean leaves, they’re not preserved in enough detail to tell for certain and they could actually be cycads.

But a few specimens from the Early Oligocene (~28 mya) of southeastern Australia and Tasmania have actually been identified as the leaves of a late-surviving species named Ptilophyllum muelleri. Since there were several other types of “relict” Mesozoic plants known to have still been present in the region around the same time (including horsetails and ginkgoes) it shouldn’t be much of a a surprise that the bennettitaleans had hung on there too – but sadly it’s not clear how much longer past this time they would have managed to survive. A drying and cooling climate towards the end of the Oligocene and into the Miocene, along with continuing competition from diversifying flowering plants, may have been enough to finally overwhelm these last few members of a once-impressive lineage.