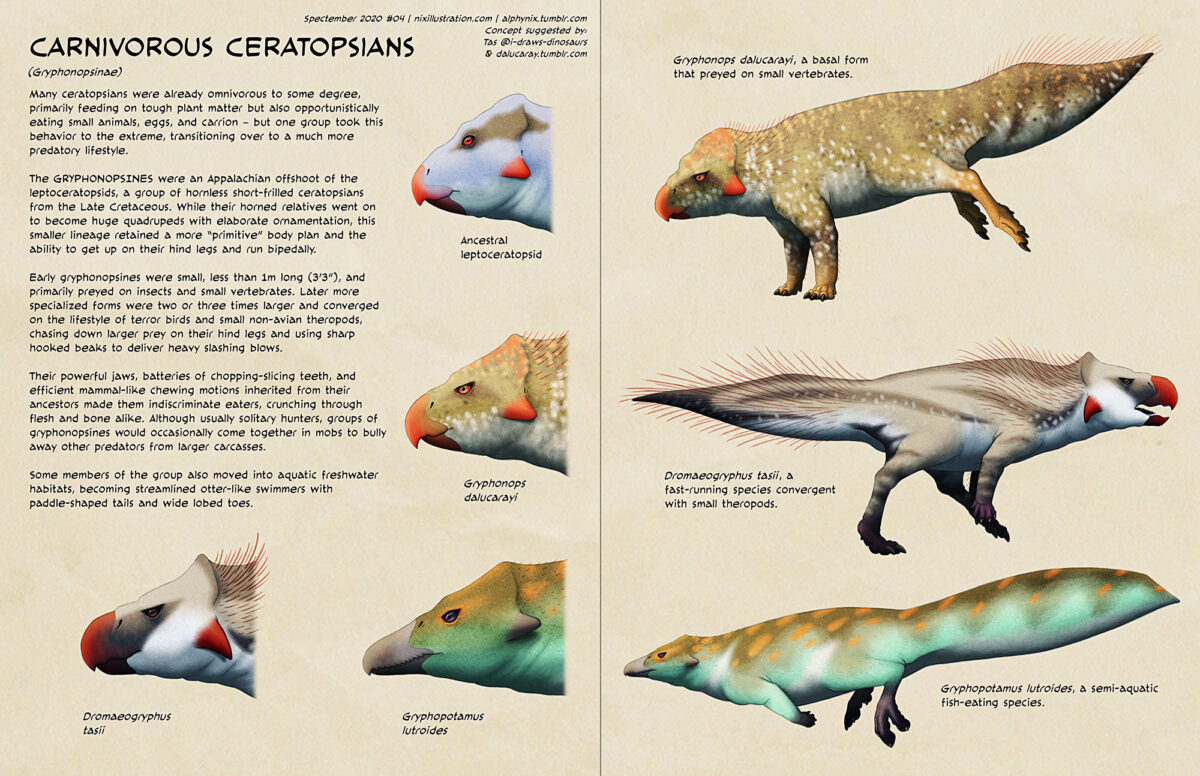 Many ceratopsians were already omnivorous to some degree, primarily feeding on tough plant matter but also opportunistically eating small animals, eggs, and carrion – but one group took this behavior to the extreme, transitioning over to a much more predatory lifestyle.

The GRYPHONOPSINES were an Appalachian offshoot of the leptoceratopsids, a group of hornless short-frilled ceratopsians from the Late Cretaceous. While their horned relatives went on to become huge quadrupeds with elaborate ornamentation, this smaller lineage retained a more “primitive” body plan and the ability to get up on their hind legs and run bipedally.

Early gryphonopsines were small, less than 1m long (3’3”), and primarily preyed on insects and small vertebrates. Later more specialized forms were two or three times larger and converged on the lifestyle of terror birds and small non-avian theropods, chasing down larger prey on their hind legs and using sharp hooked beaks to deliver heavy slashing blows.

Their powerful jaws, batteries of chopping-slicing teeth, and efficient mammal-like chewing motions inherited from their ancestors made them indiscriminate eaters, crunching through flesh and bone alike. Although usually solitary hunters, groups of gryphonopsines would occasionally come together in mobs to bully away other predators from larger carcasses.

[Image: a small quadrupedal gryphonopsine with a hawk-like beak.]
Gryphonops dalucarayi, a basal form that preyed on small vertebrates.

[Image: a gryphonopsine with a chunkier eagle-like beak running bipedally on longer hind legs. It has a serrated goose-like tongue.]
Dromaeogryphus tasii, a fast-running species convergent with small theropods.