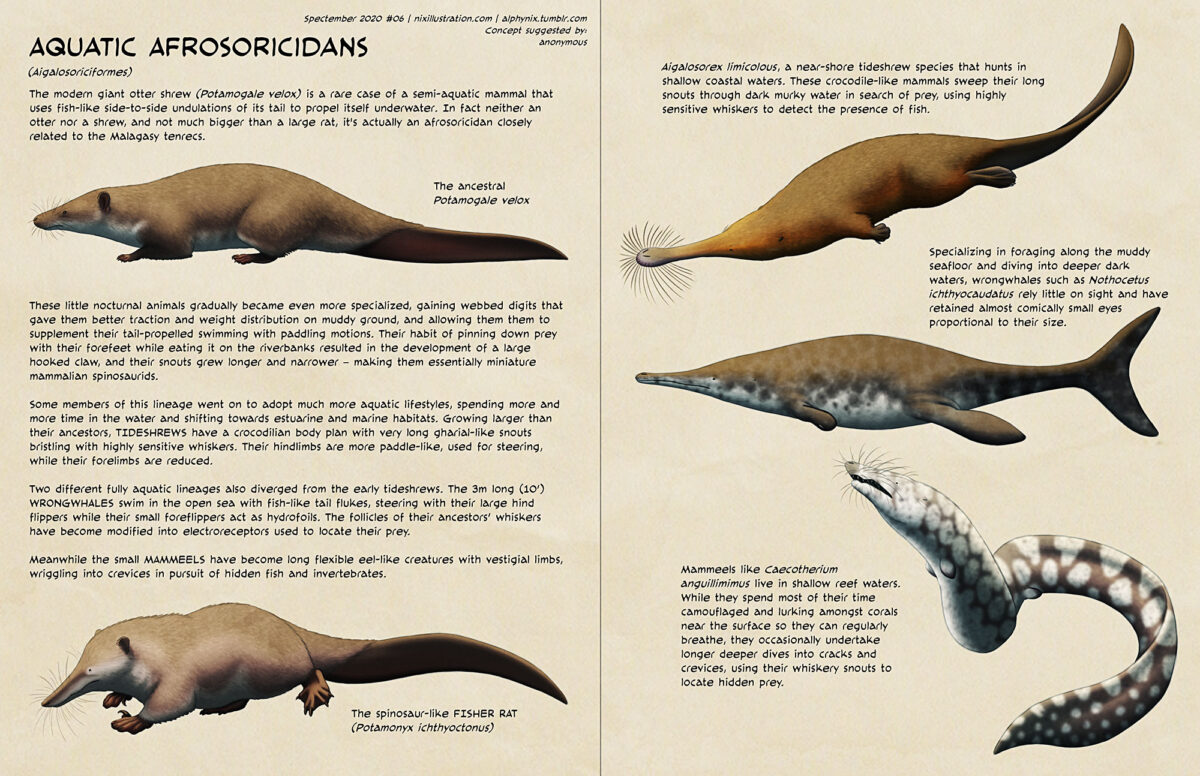 (The submitted prompt here was “some kind of fully aquatic non cetacean or dugong mammal with a different bodyplan”.)

The modern giant otter shrew (Potamogale velox) is a rare case of a semi-aquatic mammal that uses fish-like side-to-side undulations of its tail to propel itself underwater. In fact neither an otter nor a shrew, and not much bigger than a large rat, it’s actually an afrosoricidan closely related to the Malagasy tenrecs.

These little nocturnal animals gradually became even more specialized, gaining webbed digits that gave them better traction and weight distribution on muddy ground, and allowing them them to supplement their tail-propelled swimming with paddling motions. Their habit of pinning down prey with their forefeet while eating it on the riverbanks resulted in the development of a large hooked claw, and their snouts grew longer and narrower – making them essentially miniature mammalian spinosaurids.

Some members of this lineage went on to adopt much more aquatic lifestyles, spending more and more time in the water and shifting towards estuarine and marine habitats. Growing larger than their ancestors, TIDESHREWS have a crocodilian body plan with very long gharial-like snouts bristling with highly sensitive whiskers. Their hindlimbs are more paddle-like, used for steering, while their forelimbs are reduced.

Two different fully aquatic lineages also diverged from the early tideshrews. The 3m long (10’) WRONGWHALES swim in the open sea with fish-like tail flukes, steering with their large hind flippers while their small foreflippers act as hydrofoils. The follicles of their ancestors’ whiskers have become modified into electroreceptors used to locate their prey.

Meanwhile the small MAMMEELS have become long flexible eel-like creatures with vestigial limbs, wriggling into crevices in pursuit of hidden fish and invertebrates.

[Image: a descendant of the modern otter shrew, a otter-like creature with a long narrow whiskery snout, tiny eyes, webbed digits, a large hooked “thumb” claw on its forepaws, and a long vertically-flattened tail.]
The spinosaur-like FISHER RAT (Potamonyx ichthyoctonus)

[Image: a somewhat whale-like descendant of the otter shrew, with a long narrow snout, a streamlined hydrodynamic body, tiny eyes, small front flippers, large hind flippers, and a large fish-like vertical tail fluke.]
Specializing in foraging along the muddy seafloor and diving into deeper dark waters, wrongwhales such as Nothocetus ichthyocaudatus rely little on sight and have retained almost comically small eyes proportional to their size.

[Image: an eel-like descendant of the otter shrew. It resembles a moray eel with a whiskery snout, tiny eyes, and four tiny vestigial flippers.]
Mammeels like Caecotherium anguillimimus live in shallow reef waters. While they spend most of their time camouflaged and lurking amongst corals near the surface so they can regularly breathe, they occasionally undertake longer deeper dives into cracks and crevices, using their whiskery snouts to locate hidden prey.