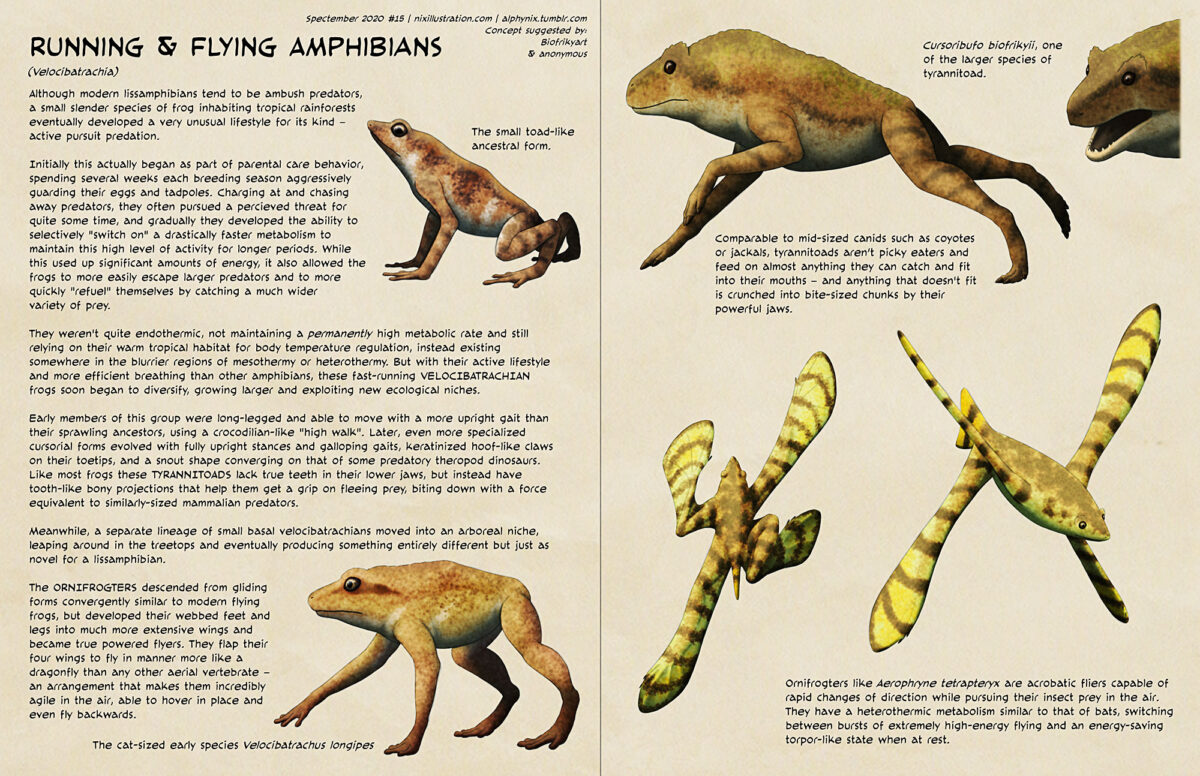 Initially this actually began as part of parental care behavior, spending several weeks each breeding season aggressively guarding their eggs and tadpoles. Charging at and chasing away predators, they often pursued a percieved threat for quite some time, and gradually they developed the ability to selectively “switch on” a drastically faster metabolism to maintain this high level of activity for longer periods. While this used up significant amounts of energy, it also allowed the frogs to more easily escape larger predators and to more quickly “refuel” themselves by catching a much wider variety of prey.

They weren’t quite endothermic, not maintaining a permanently high metabolic rate and still relying on their warm tropical habitat for body temperature regulation, instead existing somewhere in the blurrier regions of mesothermy or heterothermy. But with their active lifestyle and more efficient breathing than other amphibians, these fast-running VELOCIBATRACHIAN frogs soon began to diversify, growing larger and exploiting new ecological niches.

Early members of this group were long-legged and able to move with a more upright gait than their sprawling ancestors, using a crocodilian-like “high walk”. Later, even more specialized cursorial forms evolved with fully upright stances and galloping gaits, keratinized hoof-like claws on their toetips, and a snout shape converging on that of some predatory theropod dinosaurs. Like most frogs these TYRANNITOADS lack true teeth in their lower jaws, but instead have tooth-like bony projections that help them get a grip on fleeing prey, biting down with a force equivalent to similarly-sized mammalian predators.

Meanwhile, a separate lineage of small basal velocibatrachians moved into an arboreal niche, leaping around in the treetops and eventually producing something entirely different but just as novel for a lissamphibian.

The ORNIFROGTERS descended from gliding forms convergently similar to modern flying frogs, but developed their webbed feet and legs into much more extensive wings and became true powered flyers. They flap their four wings to fly in manner more like a dragonfly than any other aerial vertebrate – an arrangement that makes them incredibly agile in the air, able to hover in place and even fly backwards.

[Image: an even more specialized quadrupedally running frog. It has a head shape reminiscent of a theropod dinosaur, a chunky body with a sloping back, and four long galloping legs with hoof-like claws on its toes. A close-up view of its head show the tooth-like bony spikes in its lower jaw.]
Cursoribufo biofrikyii, one of the larger species of tyrannitoad.
Comparable to mid-sized canids such as coyotes or jackals, tyrannitoads aren’t picky eaters and feed on almost anything they can catch and fit into their mouths – and anything that doesn’t fit is crunched into bite-sized chunks by their powerful jaws.

[Image: a flying descendant of the original small frog. Its four limbs have become long wings shaped like those of a dragonfly, and its body is aerodynamic and cigar-shaped. It has forward-facing eyes and a vertical tail fin.]
Ornifrogters like Aerophryne tetrapteryx are acrobatic fliers capable of rapid changes of direction while pursuing their insect prey in the air. They have a heterothermic metabolism similar to that of bats, switching between bursts of extremely high-energy flying and an energy-saving torpor-like state when at rest.