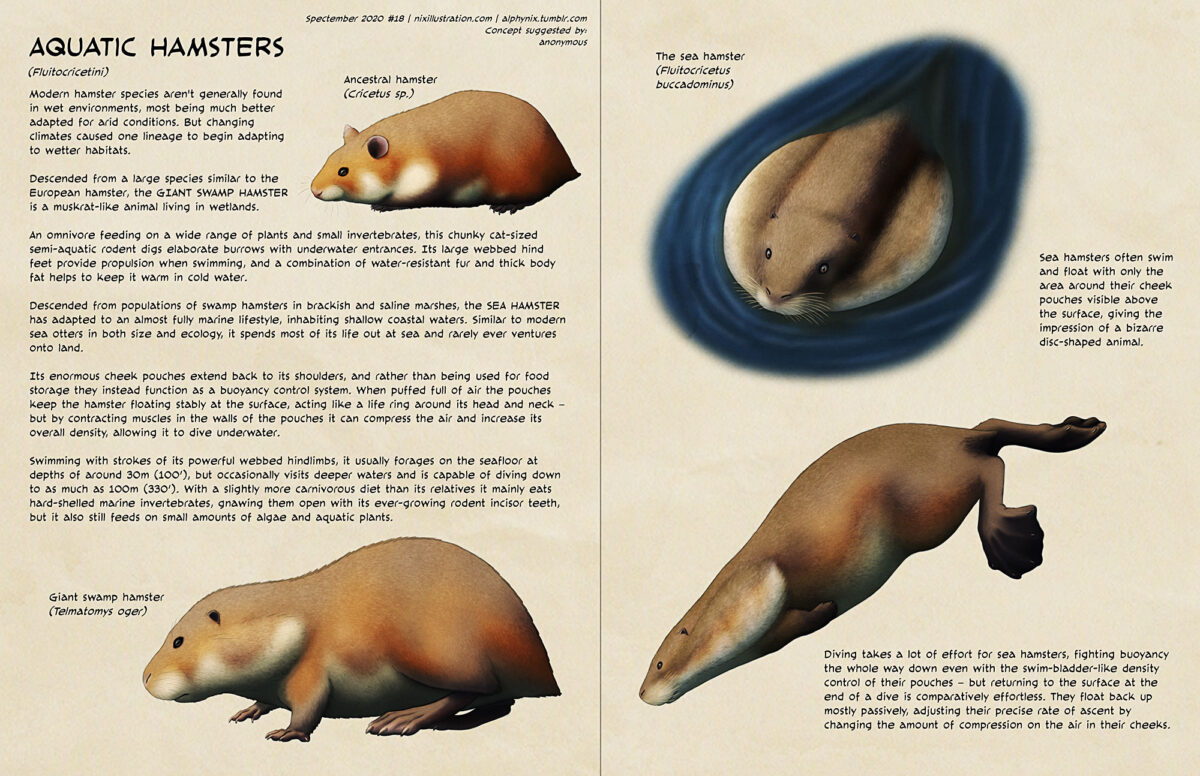 Modern hamster species aren’t generally found in wet environments, most being much better adapted for arid conditions. But changing climates caused one lineage to begin adapting to wetter habitats.

Descended from a large species similar to the European hamster, the GIANT SWAMP HAMSTER is a muskrat-like animal living in wetlands.

An omnivore feeding on a wide range of plants and small invertebrates, this chunky cat-sized semi-aquatic rodent digs elaborate burrows with underwater entrances. Its large webbed hind feet provide propulsion when swimming, and a combination of water-resistant fur and thick body fat helps to keep it warm in cold water.

Descended from populations of swamp hamsters in brackish and saline marshes, the SEA HAMSTER has adapted to an almost fully marine lifestyle, inhabiting shallow coastal waters. Similar to modern sea otters in both size and ecology, it spends most of its life out at sea and rarely ever ventures onto land.

Its enormous cheek pouches extend back to its shoulders, and rather than being used for food storage they instead function as a buoyancy control system. When puffed full of air the pouches keep the hamster floating stably at the surface, acting like a life ring around its head and neck – but by contracting muscles in the walls of the pouches it can compress the air and increase its overall density, allowing it to dive underwater.

Swimming with strokes of its powerful webbed hindlimbs, it usually forages on the seafloor at depths of around 30m (100’), but occasionally visits deeper waters and is capable of diving down to as much as 100m (330’). With a slightly more carnivorous diet than its relatives it mainly eats hard-shelled marine invertebrates, gnawing them open with its ever-growing rodent incisor teeth, but it also still feeds on small amounts of algae and aquatic plants.

[Image: an otter-like marine hamster swimming downwards. It has huge inflated cheek pouches extending to its shoulders, and large webbed hind feet that it uses to propel itself underwater.]
Diving takes a lot of effort for sea hamsters, fighting buoyancy the whole way down even with the swim-bladder-like density control of their pouches – but returning to the surface at the end of a dive is comparatively effortless. They float back up mostly passively, adjusting their precise rate of ascent by changing the amount of compression on the air in their cheeks.