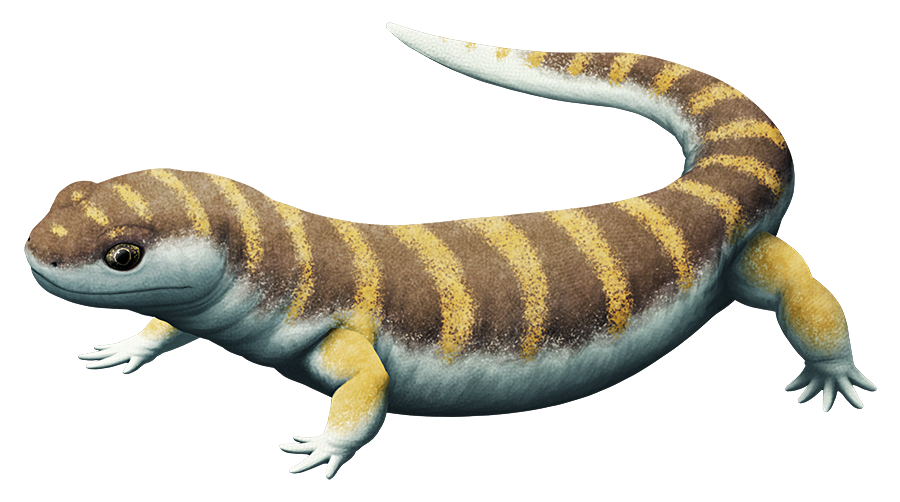 Although there are just three main types of modern amphibians alive today – the frogs, salamanders, and caecilians, collectively known as “lissamphibians” – they weren’t always the only ones.

A fourth major lineage called albanerpetontids originated in the Middle Jurassic, about 166 million years ago. They’re usually thought to be slightly closer related to frogs-and-salamanders than to caecilians, but they also might not quite be true lissamphibians and instead belong just outside the group as evolutionary “cousins”. It’s a little complicated since we’re still not actually sure which group of ancient amphibians the lissamphibians even evolved from.

Resembling tiny salamanders, usually only around 5cm long (2″), albanerpetontid fossils have been found in North America, Europe, Africa, and Asia. In some places their remains are actually quite common, suggesting they were one of the more numerous small vertebrates in their ecosystems. They’re thought to have lived mostly in leaf litter, similarly to some small modern lizards like ground skinks, wriggling and burrowing through the loose material and preying on small invertebrates.

Their most notable feature was their body being covered in a mosaic of small scales – although unlike reptile scales these were bony structures formed under a layer of skin, structurally much more like fish scales, and they probably weren’t particularly visible in life. They also had very flexible necks for amphibians, with a convergently mammal-like joint between their skull and vertebrae.

After surviving the end-Cretaceous extinction alongside their lissamphibian relatives the albanerpetontids ended up mostly restricted to just Europe, but they seem to have continued on there for pretty much the entire Cenozoic.

Albanerpeton pannonicus here was one of the very last known members of the group, living just 2.5 million years ago in the late Pliocene and early Pleistocene. Despite the albanerpetontids’ 160-million-year history and having made it through multiple mass extinctions, it seems to have been the cooling Ice Age climate that finally sent these scaly little amphibians into extinction.