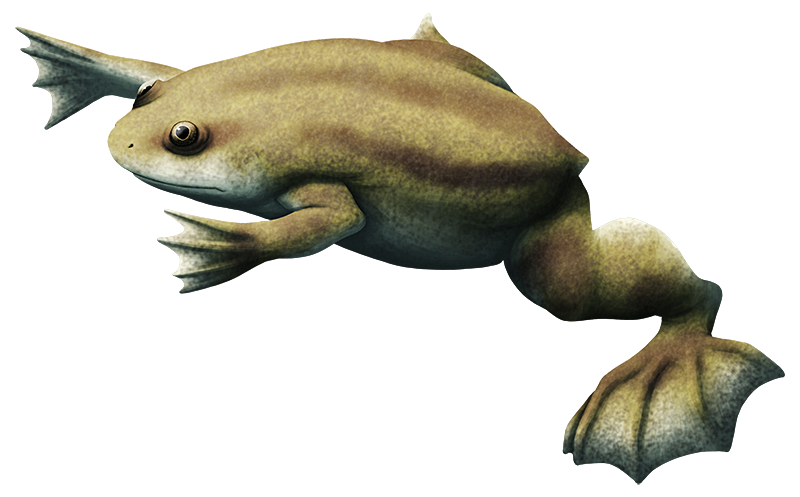 The palaeobatrachids were a group of frogs, part of a fairly “primitive” lineage that also includes the living pipids. They first appeared in the fossil record about 70 million years ago in the Late Cretaceous, but may have actually originated much earlier, perhaps as far back as the Late Jurassic (~145 mya).

These frogs lived mainly in Europe, with a few possible remains also known from North America in the Cretaceous. They were fully aquatic, spending their entire lives in water, and fully-grown adults looked similar to modern Xenopus clawed frogs, with slightly flattened egg-shaped bodies, upwards-facing eyes, and long fingers and toes.

Some fossils preserve soft-tissue impressions, showing internal organs such as unusual bag-shaped lungs. Eggs and juveniles have also been found, and while most species’ tadpoles usually reached lengths of around 6cm (2.4″), a few were comparatively gigantic, growing to over twice that size.

The end-Cretaceous extinction (~66 mya) had little overall effect on the palaeobatrachids, and they continued to thrive in the warm wet environments of Europe during the early Cenozoic. But as climates in Western Europe gradually became drier and cooler starting in the Early Oligocene (~33 mya) they mostly disappeared from that region and instead shifted east towards Central and Eastern Europe, ranging as far as Russia.

By the Late Pliocene (~3 mya) they were struggling to cope with the ongoing cooling and drying, and the onset of the Pleistocene glaciations made things even worse for them.

Palaeobatrachus langhae was probably the last species of these frogs, known from the Early Pliocene to the mid-Pleistocene (~5 mya – 500,000 years ago). Growing to about 10cm long (4″), it lived in some of the final refuges of the palaeobatrachids in Eastern Europe, inhabiting inland temperate areas where winter temperatures weren’t too harsh.

Unfortunately the palaeobatrachids didn’t quite manage to make it through the Ice Age, ending up trapped by their fairly specialized habitat preferences. During repeated glacial periods the temperatures became too cold for them, freezing the water they depended on, but the warmer climates to the south were also too dry for them to migrate into – and with nowhere to go, they finally went completely extinct just half a million years ago.