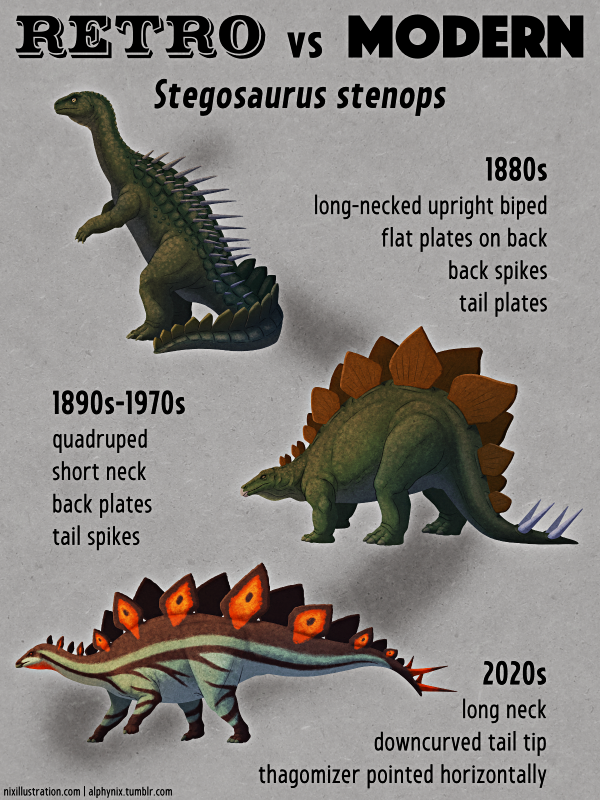 The first known stegosaur fossils were found in England and South Africa between the 1840s and 1870s, but these dinosaurs weren’t properly recognized as a highly distinctive group until the discovery of Stegosaurus itself in North America during the late 1870s.

The first Stegosaurus reconstructions were based on fragmentary and disarticulated fossil material, and its life appearance was very poorly understood. Initially it was depicted as a bipedal long-necked animal, with its plates laying flat against its back like a turtle shell, numerous spikes across its back, and more plates running along its tail.

Better skeletons of the species Stegosaurus stenops were discovered in the late 1880s, and by the 1890s stegosaur anatomy was becoming clearer. Reconstructions quickly adopted an arch-backed body shape with a tiny head and drooping tail, short semi-sprawling forelimbs and long hindlimbs, and with the plates now properly upright on the back and the spikes at the end of the tail.

Stegosaurus‘ unique appearance rapidly made it one of the most famous and recognizable dinosaurs to the general public. Its comical-seeming tiny head and even tinier brain also unfortunately ended up contributing to the prevailing early 20th century attitude that dinosaurs were sluggish and unintelligent, with the myth that it needed a “second brain” in its hips to control its huge body becoming a popular notion for quite some time.

The exact arrangement of the iconic back plates and tail spikes was uncertain for several decades, with early versions in the 1890s having up to eight tail spikes and a single row of plates. This was then updated in the 1900s to a double row of symmetrical plate pairs, and by the 1920s the standard arrangment had soon become an alternating two-row pattern with the tail spikes reduced to four – a layout that’s still considered correct today.

In the second half of the 20th century a combination of numerous new stegosaur species from China and the Dinosaur Renaissance began to revise the way Stegosaurus was understood, bringing it into a fully upright posture with its head and tail held high, and recognizing the convergently sauropod-like anatomy of its hands and feet.

But something still wasn’t right.

Compared to other known stegosaurs, Stegosaurus itself was starting to seem… rather weird. Its short neck, short forelegs, giant plates, sloping back and high rump were much more exaggeratedly proportioned than any of its relatives.

This was finally resolved in the 2010s when a near-complete specimen nicknamed “Sophie” was thoroughly described – and revealed that Stegosaurus’ proportions had been wrong the whole time. All previous skeletal reconstructions had been composites, put together from remains of multiple individuals that had all been different ages and sizes, and in the process had heavily distorted our idea of what this animal actually looked like.

Our modern view of Stegosaurus is now a much more typical stegosaur than before. It lived during the Late Jurassic, about 155-145 million years ago, across the Western and South Central United States (with a possible additional occurence in Portugal), alongside several other iconic dinosaurs of the “Jurassic savanna” like Brontosaurus, Diplodocus, and Allosaurus.

It grew up to around 9m long (~30ft), and had a small head with a long narrow snout, with a toothless beak at the front of its jaws and small peg-shaped teeth further back. Bony ossicles lined the underside of its neck, possibly providing chainmail-like protection to its throat, and its skin was covered in tiny pebbly scales interspersed with “rosettes” formed around slightly larger oval scales. Its neck was longer than previously thought, more in line with other stegosaurs, and its torso and hind legs were a bit shorter, making its posture more horizontal and its back less arched.

The actual function of the large back plates is still uncertain. Ideas about them being defensive armor (and speculation about them even being moveable!) have mostly been discounted at this point, since they were actually relatively fragile – although their keratinous covering may have had a fairly sharp edge. Thermoregulation has been a popular explanation for many decades, with blood vessel impressions in the plates being proposed as evidence they were used as “radiators” to prevent overheating like the ears of modern African elephants.

But currently the most likely primary plate function is thought to be visual display, with the large plates increasing the perceived size of Stegosaurus either to intimidate predators and rivals or to impress potential mates. If this was the case then they may have also been strikingly colored and patterned in life.

Meanwhile the “thagomizer” on its tail actually does seem to have been a weapon, with injuries to that area of the body being fairly common, and several Allosaurus fossils have been found with puncture wounds the exact size and shape of Stegosaurus spikes. Articulated specimens have also shown that the tail curved downwards at the tip, holding the thagomizer with the spikes pointing horizontally outwards and backwards.