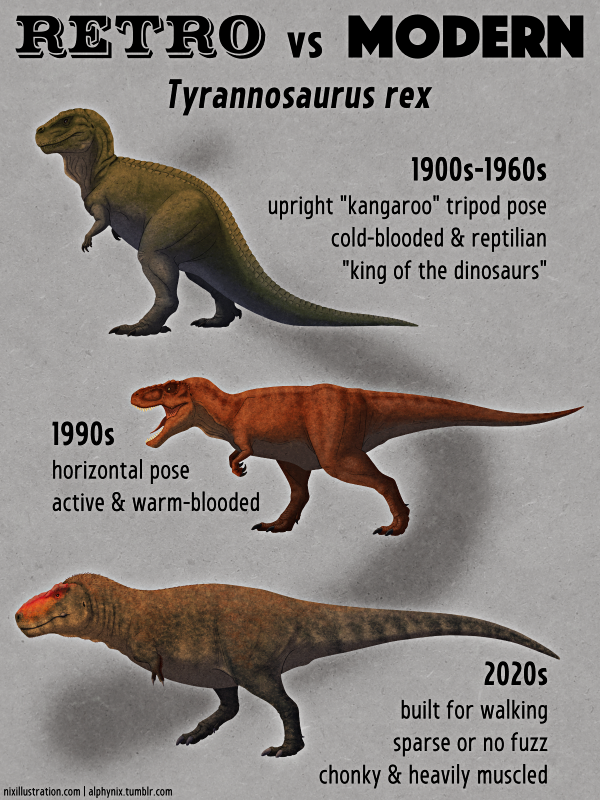 Probably the most famous and popular dinosaur of all time, Tyrannosaurus rex is also the only species commonly known by both its full scientific name and its abbreviation T. rex.

Fragments of what we now know are Tyrannosaurus fossils were first found in the Western United States in the 1870s, but it wasn’t until the early 1900s that a couple of partial skeletons were discovered and recognized as belonging to a new species of huge carnivorous theropod.

With its charismatic and memorable name meaning “tyrant lizard king” it was an immediate hit with the general public, portrayed as the “king of the dinosaurs” in pop culture and as the dramatic nemesis of Triceratops.

Like other bipedal dinosaurs of the time it was depicted in an upright kangaroo-like tripod pose, cold-blooded and lizard-like. Sometimes it was also shown with three-fingered hands, since its arms were poorly known for a long time – and while the closely-related tyrannosaurid Gorgosaurus was known to have had just two fingers, this wasn’t confirmed for Tyrannosaurus until the late 1980s.

During the 1970s and the early Dinosaur Renaissance it became obvious that bipedal dinosaurs like Tyrannosaurus couldn’t have stood so sharply upright without dislocating their hips and tail vertebrae.

Jurassic Park was influential in introducing this new corrected posture to the general public in the early 1990s, presenting a powerful and active predator with a more bird-like horizontal stance and its tail acting as a counterbalance. Reconstructions inspired by this portrayal became standard for Tyrannosaurus during the 1990s (although the old-style tripod remains in public consciousness even decades later), and while it didn’t tend to get as heavily shrinkwrapped as some other species it was still common for a while to push its belly ribs in as much as possible to make its bulky body look skinnier and more “athletic”.

The 1980s and 1990s were also a time when discoveries of new Tyrannosaurus specimens began to become much more frequent, improving knowledge of the species’ anatomy, biology, and life history. Some, like Sue, Stan, and the Dueling Dinosaurs, would also unfortunately end up becoming highly controversial, tied up in legal disputes for years and sold for multi-million-dollar prices.

After the explosion of feathered non-avian dinosaur specimens from China in the mid-1990s, eventually the small feathered tyrannosauroid Dilong was discovered in the early 2000s, followed by the much larger-bodied Yutyrannus in the early 2010s.

While these tyrannosauroids weren’t particularly closely related to Tyrannosaurus itself, the question of potential tyrant fuzz still began to loom, and for a while in the 2010s highly fluffy T. rex interpretations were popular in paleoart. But in the late 2010s a study of known skin impressions from Tyrannosaurus and several of its closer relatives showed that small pebbly scales were known from various parts of the body, and suggested that these particular dinosaurs were most likely primarily scaly. Sparser fluff was still possible on parts of the body, however, similar to the hair on modern elephants, and it’s also possible that juveniles were much fuzzier.

(While this is disappointing for fans of huge fatbird T. rex, it’s also a great example of the scientific process. The skin impressions hadn’t ever been properly described before this point, and the scaly interpretation had mostly been an assumption. Speculative fluffiness prompted all the skin evidence to actually be consolidated, and now we know a lot more about Tyrannosaurus’ potential outward appearance than we did before.)

Arguments about lips in theropod dinosaurs also went back and forth during the 2010s, with interpretations ranging from tight-skinned crocodilian-like snouts with exposed teeth to fleshy lizard-like lips similar to modern Komodo dragons. There’s not really a consensus yet, but since most non-beaked tetrapods do have lips the safe bet is still that dinosaurs like Tyrannosaurus would have had them too.

Our modern view of Tyrannosaurus is a much chunkier animal than older interpretations, with  more extensive soft tissue, properly-positioned belly ribs showing that it had a barrel-shaped pot-bellied body, and its tail being thicker-muscled than previously thought.

Living across western North America – then the island continent of Laramidia – during the very end of the Cretaceous, about 68-66 million years ago, it was one of the largest terrestrial carnivores to ever live. The very biggest known specimens are estimated to have been as much as 13m long (~43′), with the proportionally large head making up around 1.5m of that (~5′).

Its skull was boxy at the back but narrow along the snout, allowing its forward-facing eyes to have hawk-like stereoscopic vision. Large fenestrae and a “honeycomb” of air spaces reduced the weight of the skull, while reinforced fused bones strengthened it, and Tyrannosaurus is estimated to have had an incredibly powerful bone-crushing bite force.

It had a highly developed sense of smell, and its hearing was geared towards low-frequency sounds. The texture of its skull bones suggests it may also have had thick toughened keratinous skin and bumps over its face, which might have been involved in head-shoving and headbutting behaviors.

Although proportionally tiny for its overall size, its arms were still rather beefy, with large areas for muscle attachment with “meathook” claws that may have been used to hold onto struggling prey.

As a heavily-built bulky carnivore it probably wasn’t especially fast, and its legs were adapted for energy-efficient walking rather than running. It may have been a long-distance stalker, only using short bursts of speed in a final ambush – and like most large carnivores it would have also opportunistically scavenged on carcasses, too.

Specimens once argued to belong to a separate smaller species of tyrannosaur, “Nanotyrannus“, are now generally accepted as actually being juvenile Tyrannosaurus. They show a surprising amount of physical change as these animals aged, starting out leaner-built with longer legs more suited for speed, slender more delicate snouts, and only developing the characteristic chunky adult proportions during a huge growth spurt in their mid-to-late teens.

Meanwhile, the latest big controversy over this dinosaur as of March 2022 (because there’s always something) is a study proposing splitting Tyrannosaurus into three separate species: T. rex, T. imperator, and T. regina. It doesn’t seem to be going down well, but much like the feather situation it probably at least means we’re going to see a lot of further investigation over the next few years.