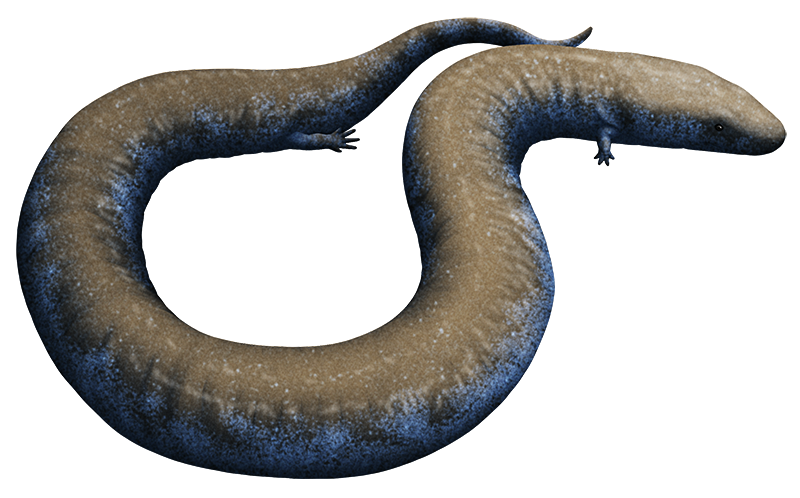 A group of salamanders called batrachosauroidids first appeared in the fossil record at the very end of the Jurassic, about 145 million years ago, originating in Europe and quickly spreading to North America. Long snake-like bodies and reduced vestigial limbs gave these amphibians a very similar appearance to modern amphiumas or sirens, but they weren’t actually very closely related to each other – instead, the batrachosauroidids’ closest living relatives are thought to be mudpuppies and the blind cave-dwelling olm.

They were probably fully aquatic, living in wetlands with slow-moving currents, and the structure of their jaws suggest they were active predators that would have fed on other smaller animals in the water.

After surviving the end-Cretaceous mass extinction fairly well, with fossils of a couple of species known from both sides of the Cretaceous-Paleogene boundary, the batrachosauroidids continued on for most of the Cenozoic. They seem to have disappeared from Europe first, with the last known record in the mid-Eocene (~40 mya), but they persisted in North America for at least another 25 million years, well into the Miocene.

One of the last known members of the group was Batrachosauroides dissimulans from the mid-Miocene of Florida and Texas, USA (~16-13 mya). It was also one of the largest of the batrachosauroidids, similar in size to modern amphiumas at around 1m long (3′3″).

Past that point in time there’s no further evidence of batrachosauroidids, although due to the rather poor fossil record of salamanders it’s possible they may have survived for a while longer – but since amphiumas and sirens began to develop larger body sizes from the Late Miocene onwards, it’s likely that they were evolving to fill the ecological niches left vacant by the extinction of the last batrachosauroidids.