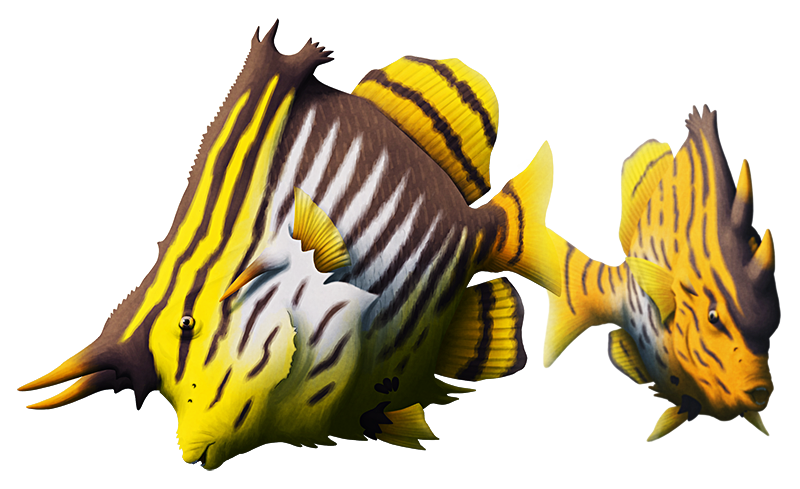 Pycnodonts were a group of fish that originated in the western Tethys Sea during the Late Triassic (~215 mya), and later spread to most of the rest of the world with the exception of Antarctica and Australia. Ranging in size from a few centimeters to around 2m (6′6″), they had deep vertically-flattened bodies and almost circular silhouettes. Although they somewhat resembled modern marine angelfish or butterflyfish, they weren’t actually very closely related, instead being part of a much older branch of neopterygian fish.

They inhabited a range of shallow coastal waters from marine to freshwater environments, and most of them had jaws full of round flat teeth used to crush hard-shelled prey – but some may have been herbivorous grazers similar to parrotfish, and one lineage even became sharp-toothed piranha-like predators.

Some also developed quite elaborate appearances, such as Hensodon spinosus here. Living during the peak of the pycnodonts’ diversity in the mid-to-late Cretaceous, its fossils are known from Lebanon and date to about 100-95 million years ago.

It was only about 7cm long (2.75″) but it was bristling with various small spines and large “horns”, with different specimens showing two distinct arrangements. One type had double-pronged forward-facing horns, while the other had two horns one after the other – this may be evidence of sexual dimorphism, with the “bull horned” form thought to be male and the “rhino horned” form thought to be female.

Hensodon was also probably stripy in life, since one fossil preserves faint evidence of a light-and-dark stripe pattern on its dorsal fin.

Only a few pycnodonts survived into the Cenozoic, and their last appearance in the fossil record was in the mid-Eocene (~40 mya). Since this was at about the same time that more modern types of reef fish began to evolve, it’s likely that a combination of new competition and changing climate conditions resulted in the last pycnodonts going extinct by the end of the Eocene around 33 million years ago.