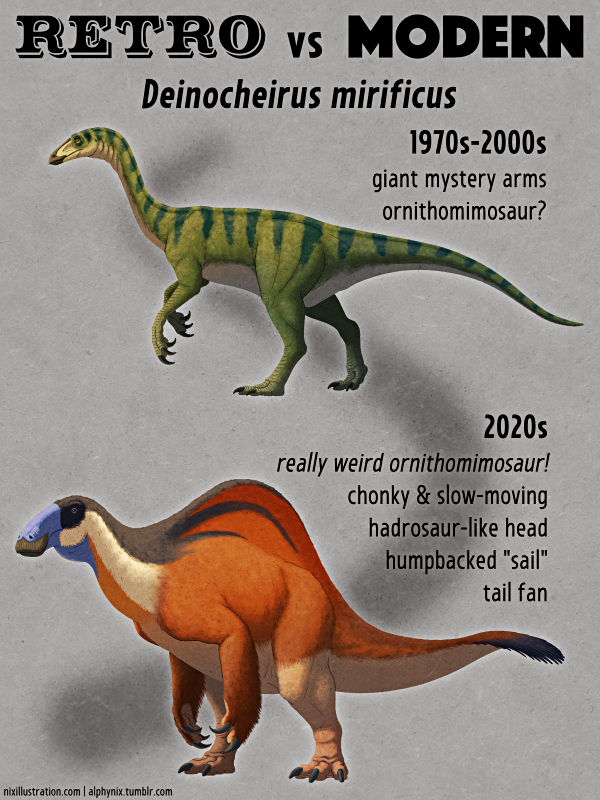 Discovered in Mongolia in the mid-1960s, and named in 1970, Deinocheirus mirificus was a famous paleontological mystery for over 40 years.

For a long time all that was known of this dinosaur was a few fragments and an enormous pair of arms – some of the largest of any known theropod at 2.4m long (7’10”) – inspiring its name meaning “wonderful terrible hands”.

Initially it was classified as a new type of carnosaur (which was something of a wastebasket group at the time), but similarities with the “ostrich-mimic” ornithomimosaurs were soon noted in the early 1970s. And despite some paleontologists trying to link Deinocheirus to the similarly big-armed therizinosaurs over the decades, the ornithomimosaur interpretation seemed to have won out by the early 2000s.

Depictions of Deinocheirus during this time period were highly speculative and reflected the uncertainty over its evolutionary relationships, varying from giant carnosaurs to therizinosaur-like forms to “Gallimimus but bigger” – or sometimes simply showing a hilarious pair of monster-arms reaching in from out-of-frame. Many popular dinosaur books just gave up entirely and only illustrated the known fossil material unreconstructed, and an iconic photograph of Mongolian paleontologist Altangerel Perle standing between the arms was commonly used to emphasize the sheer scale of the bones.

In the early 2000s attempts to find more fossil material at the original discovery site had only turned up a few additional fragments, including some belly ribs with evidence of having been bitten by a Tarbosaurus – suggesting that the specimen represented the scattered dismembered bits left behind by a feeding carnivore, and that the rest of the carcass might not even have fossilized.

But then between 2006 and 2009 a team of international paleontologists working in Mongolia found a couple of unusual partial skeletons at sites that had been looted by fossil poachers. While parts like the skulls and feet had been taken, the two specimens were still fairly complete and one still had enough arm material left to clearly identify it as Deinocheirus.

When the discovery was announced at the 2013 Society of Vertebrate Paleontology conference it was massive surprise to most of the paleontological community, confirming that Deinocheirus was indeed an ornithomimosaur, and that it was an incredibly weird one. Heavily-built, it was a much chunkier animal than its other relatives, and most surprising of all it had a humped “sailback” formed by long neural spines on its back vertebrae.

Then things got even better.

A “weird skull” had been spotted in the private fossil trade in Europe in 2011, along with some hand and foot material that perfectly matched the missing pieces of one of the new Deinocheirus specimens. The fossils were acquired and donated to a Belgian museum, and then finally were repatriated to Mongolia in 2014, filling in the rest of Deinocheirus’ appearance with a suitably surprising head to go with the rest of its body.

We now know Deinocheirus lived about 70 million years ago during the Late Cretaceous, in what is now the Gobi Desert but at the time was a river-delta-like environment with numerous river channels, shallow lakes, and mudflats.

It grew up to about 11-12m long (~36-39′) and had a long narrow skull with a wide beak and a deep lower jaw – resembling a hadrosaur more than an ornithomimosaur – and it had a rather small brain for a theropod of its size, proportionally closer to that of a sauropod. Its fairly weak jaw muscles suggest it mainly fed on soft vegetation, possibly foraging for aquatic plants in bodies of water like an enormous duck. Gastroliths in its gut helped to grind up its food, and the remains of fish in its stomach suggest that it was also somewhat omnivorous.

Its characteristic huge arms were actually one of the least strange things about it, and were actually proportionally smaller compared to its body size than other ornithomimosaurs. They were heavily muscled, though, with large curved claws, and may have been used to dig up food from mud and soft soil or to pull clumps of vegetation closer.

Its skeleton was highly pneumatized, full of lightening air sacs, but it was still a very big and bulky animal with relatively short legs that suggest it was rather slow-moving. Its feet resembled those of both hadrosaurs and tyrannosaurs, with blunt claws and adaptations for heavy weight-bearing in a bipedal stance.

The large sailback may have been a display structure, and the tip of its tail resembled a pygostyle and so may have sported a fan of feathers. The rest of its body was probably feathered similar to what’s known from other ornithomimosaurs, although potentially more sparsely due to its huge size.