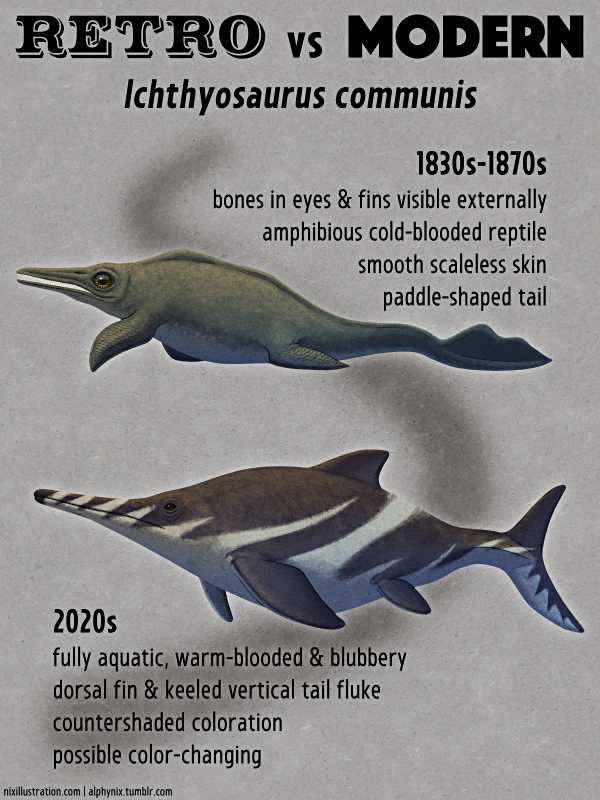 Fossilized ichthyosaur bones have been found for centuries, but were initially misidentified as being the remains of fish, dolphins, and crocodiles. More complete skeletons began to be discovered in the early 19th century – particularly by pioneering paleontologist Mary Anning – and Ichthyosaurus communis was one of the first species of these ancient “fish lizards” to be scientifically recognized.

Early reconstructions of ichthyosaurs in the 1830s depicted flippered crocodile-like animals with long straight eel-like tails and strangely shrinkwrapped features, showing the sclerotic rings of their eyes and the internal bones of their flippers as highly visible externally. They were also frequently portrayed as being amphibious, hauling themselves out of the water to bask.

By the late 1830s impressions of smooth scaleless skin had been found, and specimens with tail-tips that were always “broken” in the exact same place were interpreted as evidence of the presence of some sort of paddle-like tail fin. The 1850s Crystal Palace Ichthyosaurus statues show this slightly updated version, along with a low dorsal ridge on their backs reminiscent of a beluga whale.

This highly dolphin-like version of ichthyosaurs quickly caught on and became the standard depiction into the early 20th century, frequently showing them as highly active animals – swimming in groups, chasing fish and ammonites, and leaping dramatically out of the water like their modern cetacean counterparts. While we don’t actually know if they were social or acrobatic like dolphins, it was still a surprising and refreshing contrast to the increasingly lumpy and sluggish depictions of non-avian dinosaurs that were happening around the same time.

Actual further paleontological study on ichthyosaurs was scarce for decades, however, with a general attitude that the group was already scientifically “complete” and there wasn’t much new or interesting left to learn about them anymore. It wasn’t until the late 20th century that they began to have their own “ichthyosaur renaissance” alongside the dinosaurs, with a sharp rise in research in the last few decades bringing us a lot of new information about their diversity and biology.

Ichthyosaurus communis was just one of several species in the Ichthyosaurus genus, living during the Early Jurassic, about 196-183 million years ago, in the shallow tropical seas of what is now Europe. About 3.3m long (~11′), it was adapted for high-speed long-distance swimming like a modern tuna, and it probably had a large keeled peduncle on the sides of its tail.

Bone structure and isotope analysis show that ichthyosaurs were all warm-blooded. One exceptional specimen also preserves an insulating layer of cetacean-like blubber, along with some evidence of its coloration: overall darker on the top and lighter on the underside in a countershaded pattern.

(I’ve given this reconstruction some speculative disruptive camouflage, too.)

Some of the preserved pigmentation has enough microscopic detail to show what appear to be branched melanophore cells associated with the ability to change color – suggesting that ichthyosaurs may have been able to actively darken and lighten their coloration like some modern lizards.