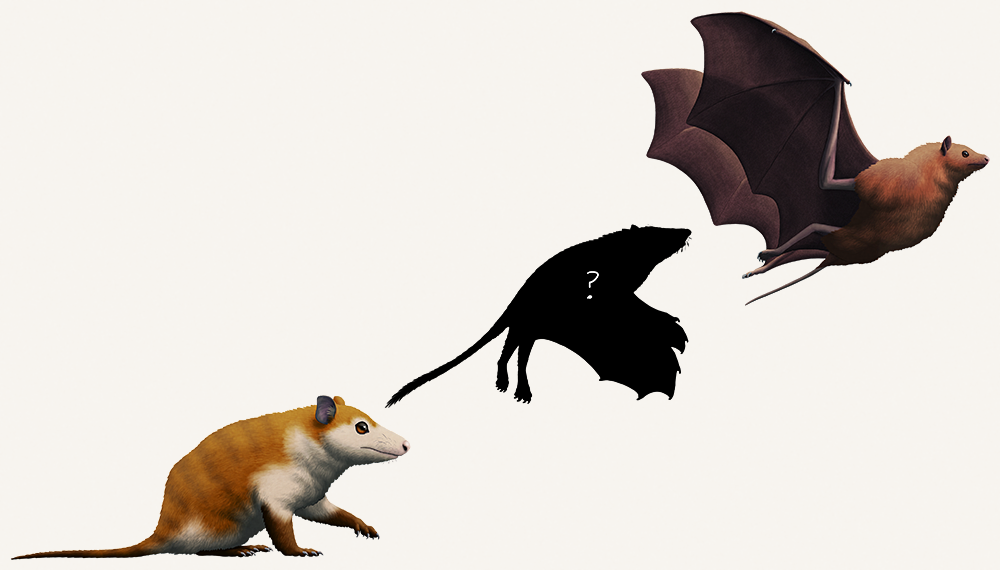 Let’s finish off this month the same way we started: with flying vertebrates without any transitional forms!

Much like the pterosaurs, bats appear suddenly in the fossil record already fully flight-adapted. Despite being the second-largest group of mammals, bats’ small fragile bones and terrestrial habitats make fossils of them incredibly rare, and transitional forms are still entirely unknown. (Even the ancestral form illustrated above is a generic hypothetical mammal!)

The most “primitive” known bats come from the Early Eocene* (~55-52 mya) and various early representatives have been found as far apart as North America, Europe, India, and Australia – indicating they were already a widespread and diverse group by that time, and making it difficult to pin down just where and when they actually might have originated.

*I’ve seen mentions of a potential bat-like tooth from the Late Cretaceous of South America, but can’t find any actual references for it. So it’s possible bats may even have evolved before the K-Pg extinction.

Although bats were once thought to be related to archontans (treeshrews, colugos, and primates) based on morphological similarities, more recent genetic studies have shown them to instead be grouped with the laurasiatheres (eulipotyphylans, carnivorans, pangolins, ungulates, and whales). Based on this phylogenetic position the earliest ancestors of bats may have been small tree-climbing shrew-like animals who evolved flight while leaping in pursuit of insects. They might even be closely related to an obscure group called nyctitheriids – but without a lucky find of an exceptional fossil, we just don’t know.