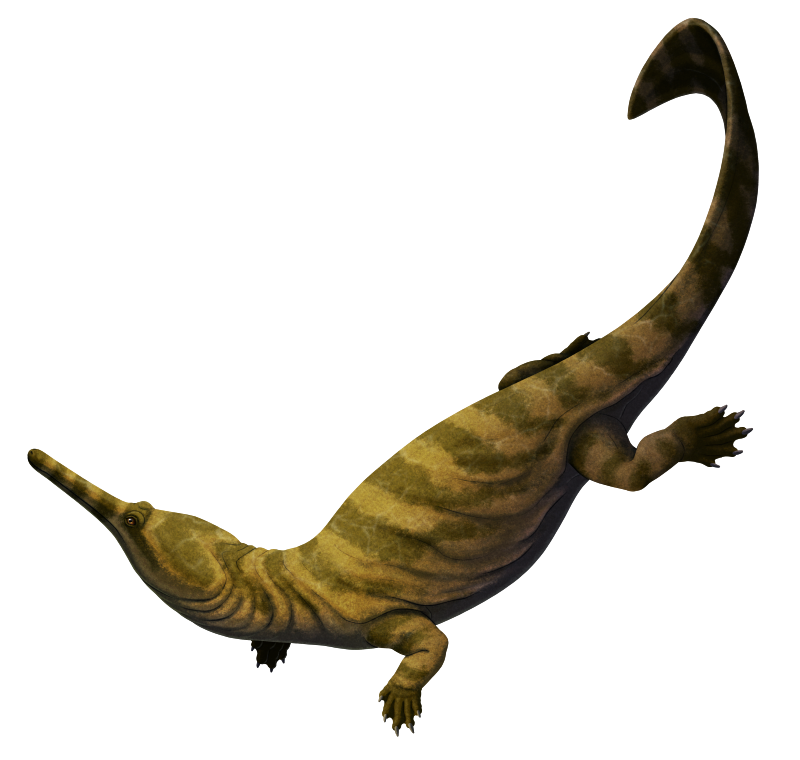 Champsosaurus might look a lot like an unarmored crocodilian, but it was actually only very distantly related to them – this animal was part of a completely extinct reptile lineage known as choristoderes, and its very gharial-like appearance was the result of convergent evolution.

Found in freshwater habitats across North America and Europe, several different species of Champsosaurus are known from around the middle of the Late Cretaceous through to the end of the Paleocene, surviving through the devasting K-Pg mass extinction 66 million years ago.

Champsosaurus laramiensis here lived in western North America and ranged right across the time of the extinction event, dating to between about 70 and 62 million years ago. Around 1.5m long (~5′), it had a flattened skull that was very wide at the back, supporting powerful jaw muscles, with a long narrow toothy snout that could sweep rapidly through the water to snap at fish in a similar manner to modern gharials. Its nostrils were right at the tip of its snout, and it may have used it like a snorkel, only sticking the very end out of the water to breathe.

Skin impressions show it was covered in numerous tiny scales, most less than 0.5mm in size (0.01″), which wouldn’t have been particularly visible from a distance.

There also seems to have been some sexual dimorphism in this species, with females having much more well-developed limb bones – allowing them to occasionally haul themselves out onto the shore to lay eggs, while males were probably fully aquatic and unable to support themselves on land.