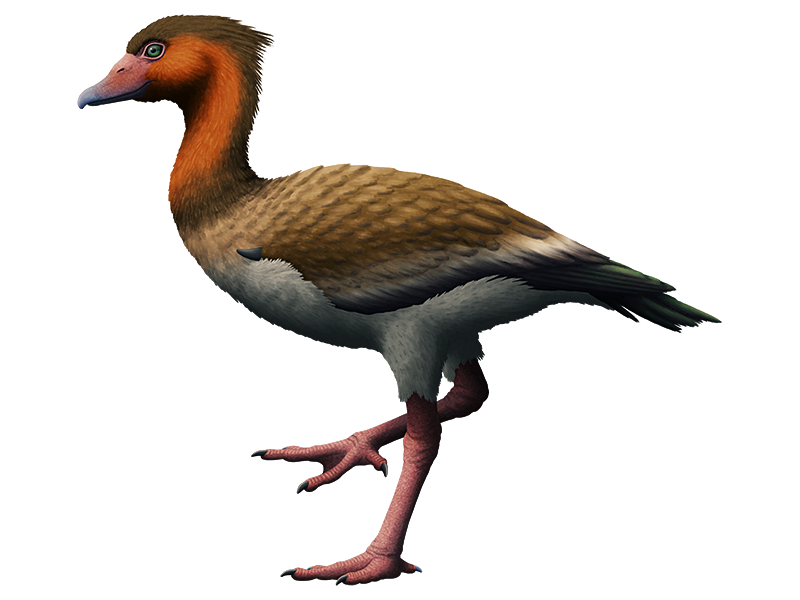 The presbyornithids were an early group of waterfowl birds – relatives of modern ducks, geese, swans, and screamers – that first appeared in the Late Cretaceous, about 71 million years ago. With their long necks, long legs, and duck-like bills adapted for filter-feeding, they seem to have essentially been primitive ducks converging on the body shape and lifestyle of flamingos – and as a result they’re sometimes even nicknamed “flamingo ducks”.

They lived in shallow freshwater environments all around the world, and after surviving through the end-Cretaceous extinction they even became some of the most common waterbirds in the early Cenozoic. Some species have been found in large bonebeds containing fossils from thousands of individuals all in one place, suggesting they were very social and lived in huge flocks.

Around the mid-to-late Eocene (~40-37 mya) they seemed to disappear completely, until some fossils from Australia that were originally thought to be from a species of ancient stone-curlew were reassessed in 2016 and found to actually represent the latest-surviving members of the presbyornithids.

Named Wilaru, this bird lived in South Australia during the Late Oligocene and Early Miocene (~28-20 mya). Two different species have been identified: Wilaru tedfordi and its slightly larger and stockier descendant Wilaru prideauxi. With only partial pieces of their skeletons known it’s difficult to estimate their full life size, but based on similar presbyornithids they were probably both somewhere around 1m tall (3′3″).

As well as outliving the rest of their kind, the two Wilaru species were also rather weird compared to the other known flamingo-ducks, with adaptations that indicate they were spending much more time walking around on land than wading in water. Their feet resembled those of modern screamers (which are also more terrestrial) and may have partially or fully lost their webbing, and since they lived alongside various other species of waterfowl and early flamingos they clearly weren’t competing for the same ecological niches. It’s possible they might have also shifted away from their ancestral filter-feeding diet, perhaps becoming more herbivorous, but without any preserved skulls we can’t tell for certain.

Unlike other presbyornithids they also had large spurs on their wings – and based on the behavior of modern spurred waterfowl this suggests they were much less social. They were probably rather aggressive animals, living solitary or in pairs and fighting each other over mates and territory.

This major departure from the lifestyle of their ancestors may have been what allowed Wilaru to survive for so much longer than all the other presbyornithids. They might potentially have lasted a few more million years into the mid-Miocene, but a cooling and drying climate – especially a sudden temperature drop about 14 million years ago – may ultimately have altered their habitat and food sources too quickly for them cope with.