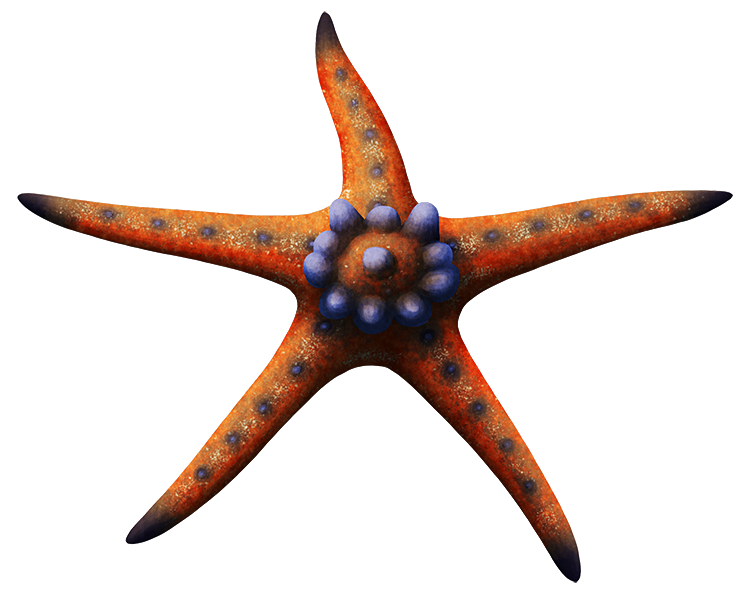 Known mainly from around Europe – with a few records from the Atlantic coast of North America and the Caribbean – the stauranderasterids were a family of starfish that first appeared about 190 million years ago in the Early Jurassic.

Not much is known about their life ecology, although they seem to have inhabited shallow tropical seas and like many other starfish would probably have preyed on various slow-moving marine invertebrates. Complete specimens are very rare compared to just isolated elements, making their maximum size difficult to estimate, but they likely grew to at least 5-10cm across (2″-4″).

They had enlarged ossicles forming a bumpy “crown” over their central disc, with five arms that could be either narrow and elongated (such as in Stauranderaster coronatus here) or shorter and club-shaped (like Manfredaster bulbiferus). This gave them some visual similarities to modern starfish like Protoreaster, and since they were both part of a larger grouping of starfish called valvatids it’s unclear whether these features mean that they were very closely related to each other or if it was simply due to convergent evolution.

The stauranderasterids survived until at least the Late Paleocene/Early Eocene (~56 mya), but some possible remains from Cuba date to as recently as the Early Micoene (~23-16 mya).