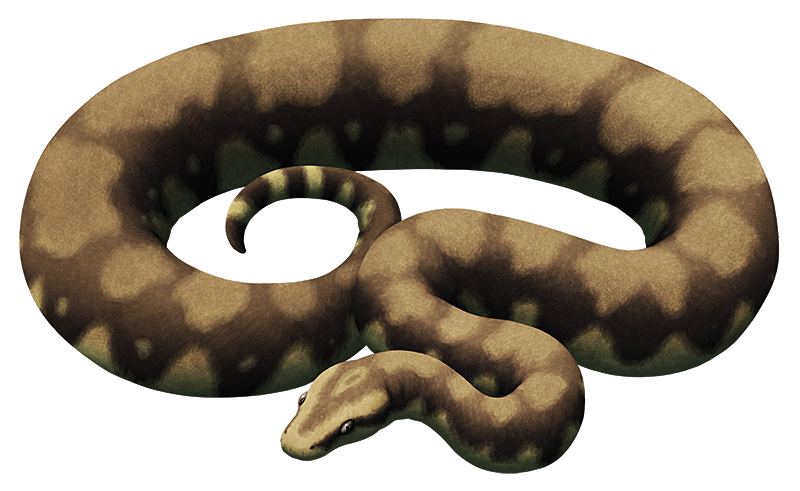 While the evolutionary origin of snakes is still rather poorly understood, one very early branch of their lineage – known as the madtsoiids – were a particularly long-lived group.

Originating back in the mid-Cretaceous (~100 mya), these “primitive” snakes were found mostly in the southern continents of Gondwana (known from South America, Africa, India, and Australia), but a few also spread into Europe. They were either some of the earliest true snakes or perhaps ophidians very closely related to them, and may have retained small hindlimbs that were slightly more well-developed than the vestigal ones of some modern snakes.

They ranged in length from under 1m (3′3″) to at least 7m (23′), with biggest of them rivaling some of the very largest living snakes in size.

They would have been similar to pythons, non-venomous and relying on constriction to kill their prey, although they had less flexible skulls than their modern relatives and couldn’t easily swallow animals much larger than their own heads. At least some of the Cretaceous species would have preyed on smaller dinosaurs, with one fossil even preserving a mid-sized madtsoiid in a sauropod nest alongside a hatchling.

Although the madtsoiids survived the end-Cretaceous extinction quite well and kept going throughout most of their range for the first half of the Cenozoic, most of them eventually disappeared in the Eocene-Oligocene extinction about 33 million years ago.

Aside from a single possible Late Olgiocene/Early Miocene record from South America (~29-21 mya), after that point the madtsoiids were found only in Australia, where they persisted almost into modern times.

Wonambi naracoortensis was one of the last of the Australian madtsoiids, living from the mid-Miocene (~11 mya) to at least the Late Pleistocene (~40,000 years ago). It was also one of the larger members of the group, 5-6m long (16′5″-19′8″), and seems to have been an ambush predator that lurked around waterholes to catch drinking animals.

The last madtsoiids went extinct at the same time as many of the other Australian megafauna, and it’s not clear exactly what caused them to die out. Humans had arrived in Australia about 20,000 years earlier, and hunting – either directly targeting the large snakes, or simply gradually reducing their available prey – combined with a changing climate may have been too much for them to handle.