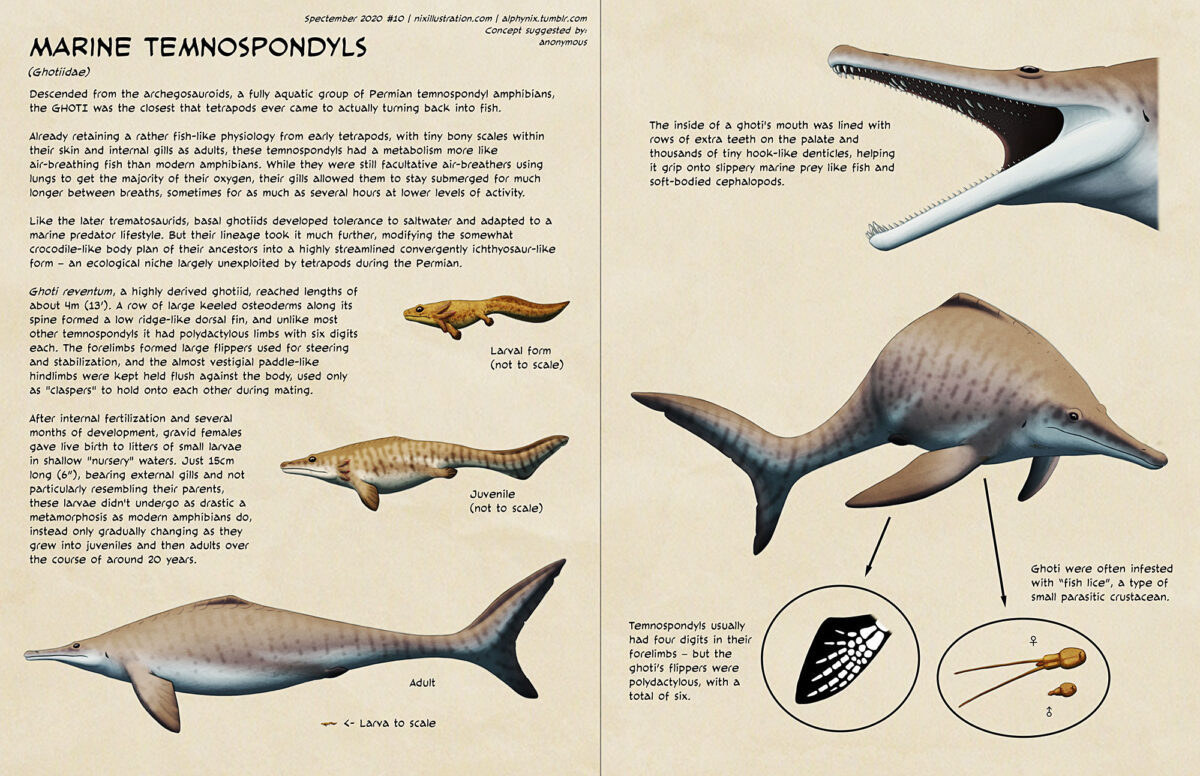 Descended from the archegosauroids, a fully aquatic group of Permian temnospondyl amphibians, the GHOTI was the closest that tetrapods ever came to actually turning back into fish.

Already retaining a rather fish-like physiology from early tetrapods, with tiny bony scales within their skin and internal gills as adults, these temnospondyls had a metabolism more like air-breathing fish than modern amphibians. While they were still facultative air-breathers using lungs to get the majority of their oxygen, their gills allowed them to stay submerged for much longer between breaths, sometimes for as much as several hours at lower levels of activity.

Like the later trematosaurids, basal ghotiids developed tolerance to saltwater and adapted to a marine predator lifestyle. But their lineage took it much further, modifying the somewhat crocodile-like body plan of their ancestors into a highly streamlined convergently ichthyosaur-like form – an ecological niche largely unexploited by tetrapods during the Permian.

Ghoti reventum, a highly derived ghotiid, reached lengths of about 4m (13′). A row of large keeled osteoderms along its spine formed a low ridge-like dorsal fin, and unlike most other temnospondyls it had polydactylous limbs with six digits each. The forelimbs formed large flippers used for steering and stabilization, and the almost vestigial paddle-like hindlimbs were kept held flush against the body, used only as “claspers” to hold onto each other during mating.

After internal fertilization and several months of development, gravid females gave live birth to litters of small larvae in shallow “nursery” waters. Just 15cm long (6″), bearing external gills and not particularly resembling their parents, these larvae didn’t undergo as drastic a metamorphosis as modern amphibians do, instead only gradually changing as they grew into juveniles and then adults over the course of around 20 years.

[Image: a small axolotl-like larval amphibian with a blunt snout, large eyes, and external gills.]
Larval form (not to scale)

[Image: a juvenile with a more fish-like body shape, smaller external gills, a longer snout, and its front flippers larger than its hind flippers.]
Juvenile (not to scale)

[Image: an adult ghoti, a streamlined ichthyosaur-like amphibian with a long crocodile-like snout, large front flippers, a dorsal ridge, tiny hind flippers, and a shark-like vertical tail fluke. Below it a tiny larva is shown to scale, just 3% the length of the adult.]
Adult
← Larva to scale

[Image: a view of the ghoti’s head with its jaws open. There are rows of extra teeth along its palate, some of which are large and fang-like.]
The inside of a ghoti’s mouth was lined with rows of extra teeth on the palate and thousands of tiny hook-like denticles, helping it grip onto slippery marine prey like fish and soft-bodied cephalopods.

[Image: a swimming ghoti, with close-up details of some tiny parasites on its skin and an x-ray view of the bone structure of its front flipper, showing six “fingers”.]
Temnospondyls usually had four digits in their forelimbs – but the ghoti’s flippers were polydactylous, with a total of six.
Ghoti were often infested with “fish lice”, a type of small parasitic crustacean.