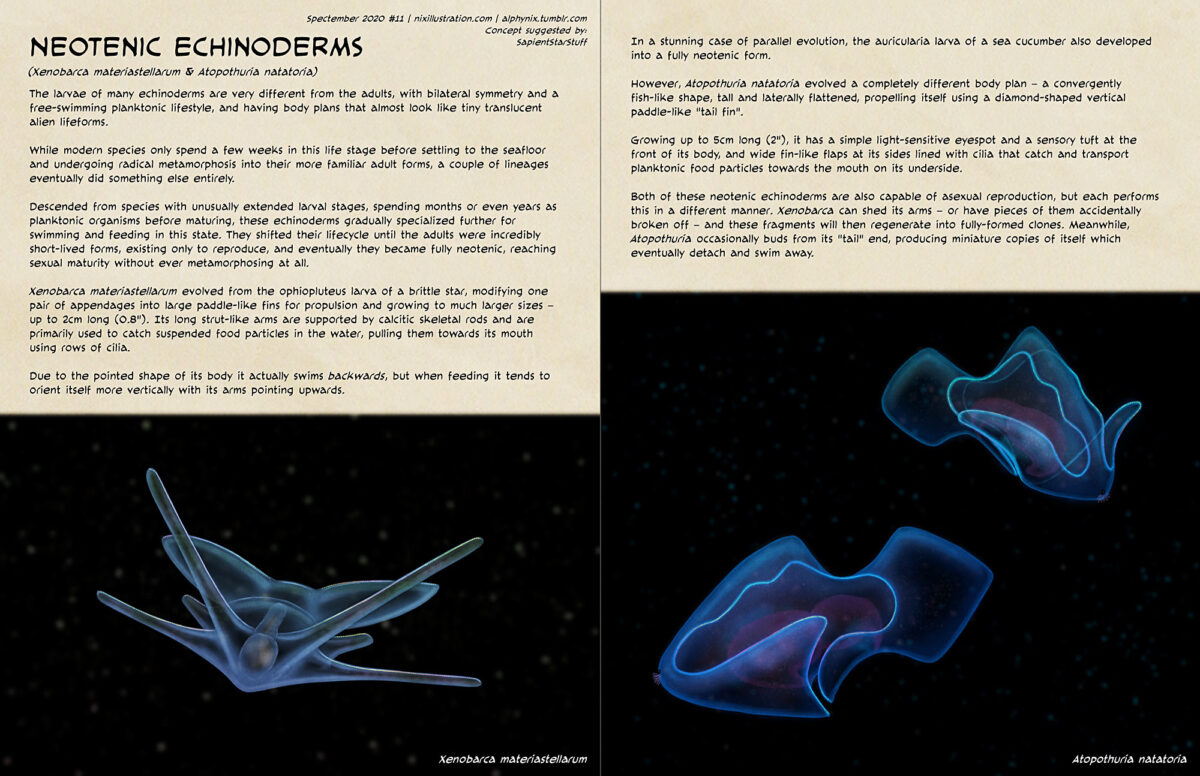 The larvae of many echinoderms are very different from the adults, with bilateral symmetry and a free-swimming planktonic lifestyle, and having body plans that almost look like tiny translucent alien lifeforms.

While modern species only spend a few weeks in this life stage before settling to the seafloor and undergoing radical metamorphosis into their more familiar adult forms, a couple of lineages eventually did something else entirely.

Descended from species with unusually extended larval stages, spending months or even years as planktonic organisms before maturing, these echinoderms gradually specialized further for swimming and feeding in this state. They shifted their lifecycle until the adults were incredibly short-lived forms, existing only to reproduce, and eventually they became fully neotenic, reaching sexual maturity without ever metamorphosing at all.

Xenobarca materiastellarum evolved from the ophiopluteus larva of a brittle star, modifying one pair of appendages into large paddle-like fins for propulsion and growing to much larger sizes – up to 2cm long (0.8″). Its long strut-like arms are supported by calcitic skeletal rods and are primarily used to catch suspended food particles in the water, pulling them towards its mouth using rows of cilia.

Due to the pointed shape of its body it actually swims backwards, but when feeding it tends to orient itself more vertically with its arms pointing upwards.

[Image: a small swimming creature descended from the larvae of brittle stars. It looks almost alien, with four long strut-like appendages extending outwards from a triangular “front” section, two shorter fins in the midsection, and two large paddle-like horizontal “tail flukes” at the rear. It’s translucent, with a gut visible inside its body, and there are bands of iridescent cilia lining the edges of its appendages.]

In a stunning case of parallel evolution, the auricularia larva of a sea cucumber also developed into a fully neotenic form.

Growing up to 5cm long (2″), it has a simple light-sensitive eyespot and a sensory tuft at the front of its body, and wide fin-like flaps at its sides lined with cilia that catch and transport planktonic food particles towards the mouth on its underside.

Both of these neotenic echinoderms are also capable of asexual reproduction, but each performs this in a different manner. Xenobarca can shed its arms – or have pieces of them accidentally broken off – and these fragments will then regenerate into fully-formed clones. Meanwhile, Atopothuria occasionally buds from its “tail” end, producing miniature copies of itself which eventually detach and swim away.

[Image: a small swimming creature descended from the larvae of sea cucumbers. It looks vaguely like an alien fish, with a vertically flattened body, two fin-like flaps at its sides, and a diamond-shaped vertical tail fin. It’s translucent, with a gut visible inside its body, a band of iridescent cilia loops around its body, and it has a single “eye” at the front above a small cluster of longer sensory cilia.]