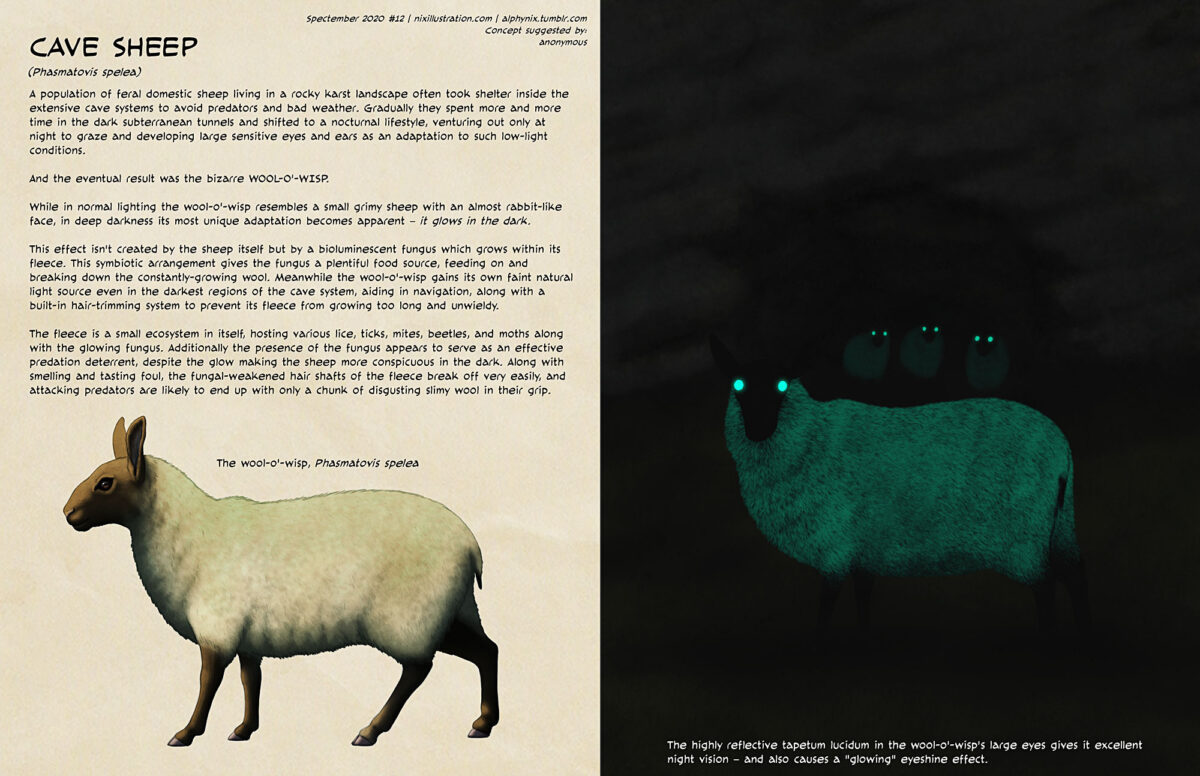 A population of feral domestic sheep living in a rocky karst landscape often took shelter inside the extensive cave systems to avoid predators and bad weather. Gradually they spent more and more time in the dark subterranean tunnels and shifted to a nocturnal lifestyle, venturing out only at night to graze and developing large sensitive eyes and ears as an adaptation to such low-light conditions.

And the eventual result was the bizarre WOOL-O’-WISP.

While in normal lighting the wool-o’-wisp resembles a small grimy sheep with an almost rabbit-like face, in deep darkness its most unique adaptation becomes apparent – it glows in the dark.

This effect isn’t created by the sheep itself but by a bioluminescent fungus which grows within its fleece. This symbiotic arrangement gives the fungus a plentiful food source, feeding on and breaking down the constantly-growing wool. Meanwhile the wool-o’-wisp gains its own faint natural light source even in the darkest regions of the cave system, aiding in navigation, along with a built-in hair-trimming system to prevent its fleece from growing too long and unwieldy.

The fleece is a small ecosystem in itself, hosting various lice, ticks, mites, beetles, and moths along with the glowing fungus. Additionally the presence of the fungus appears to serve as an effective predation deterrent, despite the glow making the sheep more conspicuous in the dark. Along with smelling and tasting foul, the fungal-weakened hair shafts of the fleece break off very easily, and attacking predators are likely to end up with only a chunk of disgusting slimy wool in their grip.

[Image: a sheep with a vaguely rabbit-like head, with large eyes and long ears. Its woolly coat is short and rather grimy-looking.]
The wool-o’-wisp, Phasmatovis spelea

[Image: a wool-o’-wisp in the dark, its wool glowing with a faint blue-green color and its eyes reflecting light. In the background, three more lurk in a cave entrance.]
The highly reflective tapetum lucidum in the wool-o’-wisp’s large eyes gives it excellent night vision – and also causes a “glowing” eyeshine effect.