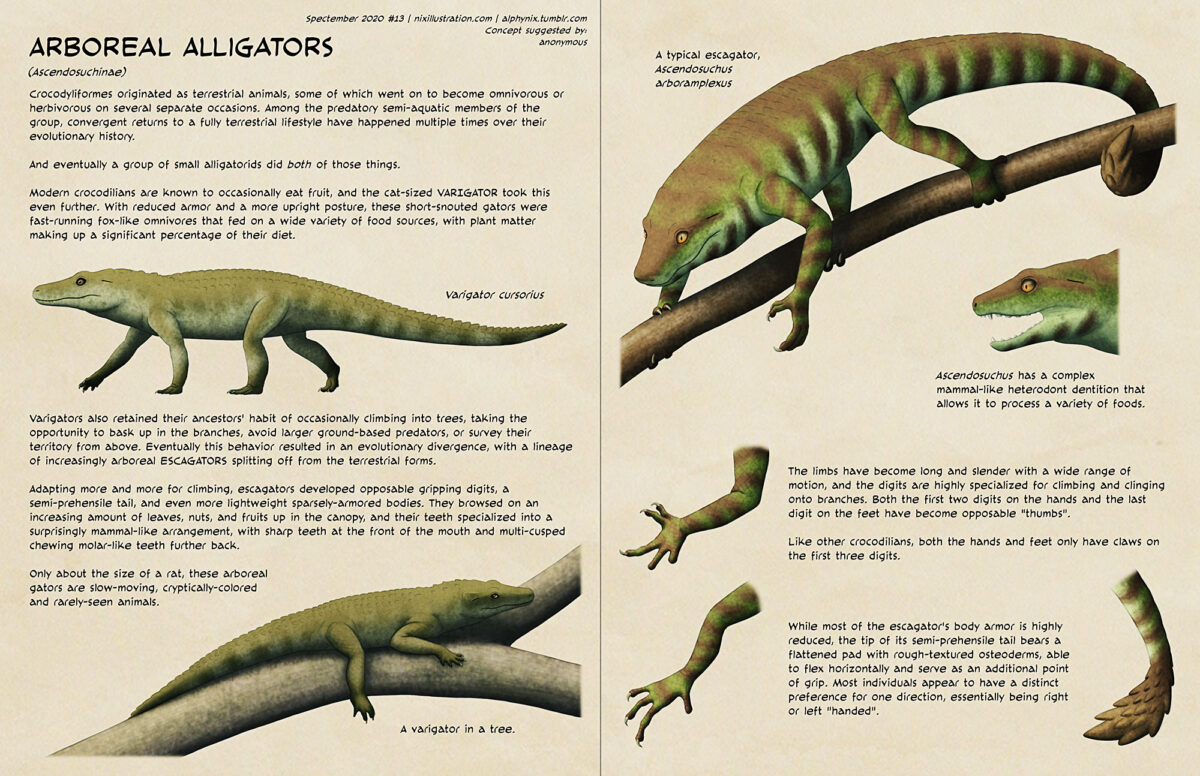 Crocodyliformes originated as terrestrial animals, some of which went on to become omnivorous or herbivorous on several separate occasions. Among the predatory semi-aquatic members of the group, convergent returns to a fully terrestrial lifestyle have happened multiple times over their evolutionary history.

And eventually a group of small alligatorids did both of those things.

Modern crocodilians are known to occasionally eat fruit, and the cat-sized VARIGATOR took this even further. With reduced armor and a more upright posture, these short-snouted gators were fast-running fox-like omnivores that fed on a wide variety of food sources, with plant matter making up a significant percentage of their diet.

Varigators also retained their ancestors’ habit of occasionally climbing into trees, taking the opportunity to bask up in the branches, avoid larger ground-based predators, or survey their territory from above. Eventually this behavior resulted in an evolutionary divergence, with a lineage of increasingly arboreal ESCAGATORS splitting off from the terrestrial forms.

Adapting more and more for climbing, escagators developed opposable gripping digits, a semi-prehensile tail, and even more lightweight sparsely-armored bodies. They browsed on an increasing amount of leaves, nuts, and fruits up in the canopy, and their teeth specialized into a surprisingly mammal-like arrangement, with sharp teeth at the front of the mouth and multi-cusped chewing molar-like teeth further back.

Only about the size of a rat, these arboreal gators are slow-moving, cryptically-colored and rarely-seen animals.

[Image: a varigator resting up on a tree branch.]
A varigator in a tree.

[Image: a descendant of the terrestrial alligator, clinging to a branch. It’s a vaguely chameleon-like reptile with long slender limbs, opposable digits on its hands and feet, a semi-prehensile tail, and reduced body armor. It’s face has a short broad snout and its eyes are forward-facing.]
A typical escagator, Ascendosuchus arboramplexus

[Image: detail of an escagator’s head with its mouth open, showing its mammal-like differentiated teeth.]
Ascendosuchus has a complex mammal-like heterodont dentition that allows it to process a variety of foods.

[Image: detail of an escagator’s limbs, showing the “double thumbs” on the hand and the opposable fourth toe on the foot.]
The limbs have become long and slender with a wide range of motion, and the digits are highly specialized for climbing and clinging onto branches. Both the first two digits on the hands and the last digit on the feet have become opposable “thumbs”.

Like other crocodilians, both the hands and feet only have claws on the first three digits.

[Image: detail of the tip of an escagator’s tail, showing the broad pad covered with triangular scale-like osteoderms.]
While most of the escagator’s body armor is highly reduced, the tip of its semi-prehensile tail bears a flattened pad with rough-textured osteoderms, able to flex horizontally and serve as an additional point of grip. Most individuals appear to have a distinct preference for one direction, essentially being right or left “handed”.