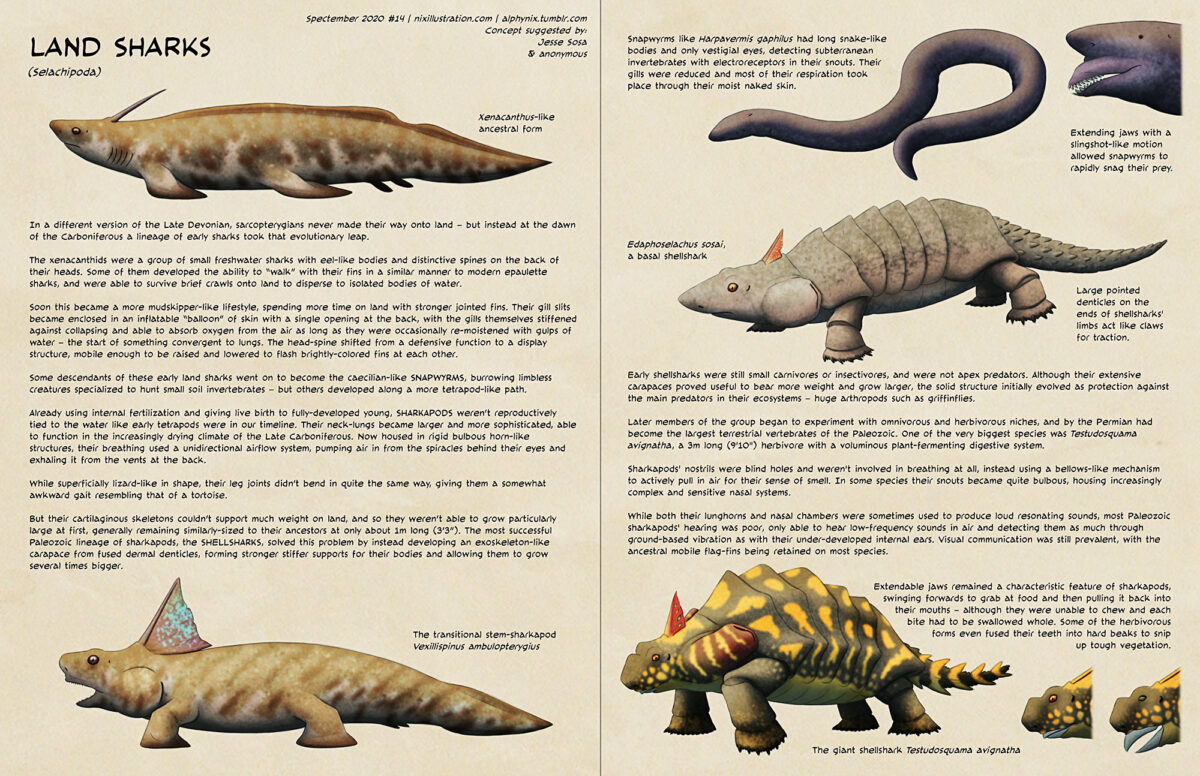 (I will probably do more with these pipe-necked weirdos at a later date.)

[Image: an early shark with a tapering eel-like body plan and four flipper-like fins. Its dorsal fin is ribbonlike, forming a continuous low fin along its back and tail. There’s a long pointed spine on the back of its head.]
Xenacanthus-like ancestral form

In a different version of the Late Devonian, sarcopterygians never made their way onto land – but instead at the dawn of the Carboniferous a lineage of early sharks took that evolutionary leap.

The xenacanthids were a group of small freshwater sharks with eel-like bodies and distinctive spines on the back of their heads. Some of them developed the ability to “walk” with their fins in a similar manner to modern epaulette sharks, and were able to survive brief crawls onto land to disperse to isolated bodies of water.

Soon this became a more mudskipper-like lifestyle, spending more time on land with stronger jointed fins. Their gill slits became enclosed in an inflatable “balloon” of skin with a single opening at the back, with the gills themselves stiffened against collapsing and able to absorb oxygen from the air as long as they were occasionally re-moistened with gulps of water – the start of something convergent to lungs. The head-spine shifted from a defensive function to a display structure, mobile enough to be raised and lowered to flash brightly-colored fins at each other.

Some descendants of these early land sharks went on to become the caecilian-like SNAPWYRMS, burrowing limbless creatures specialized to hunt small soil invertebrates – but others developed along a more tetrapod-like path.

Already using internal fertilization and giving live birth to fully-developed young, SHARKAPODS weren’t reproductively tied to the water like early tetrapods were in our timeline. Their neck-lungs became larger and more sophisticated, able to function in the increasingly drying climate of the Late Carboniferous. Now housed in rigid bulbous horn-like structures, their breathing used a unidirectional airflow system, pumping air in from the spiracles behind their eyes and exhaling it from the vents at the back.

While superficially lizard-like in shape, their leg joints didn’t bend in quite the same way, giving them a somewhat awkward gait resembling that of a tortoise.

But their cartilaginous skeletons couldn’t support much weight on land, and so they weren’t able to grow particularly large at first, generally remaining similarly-sized to their ancestors at only about 1m long (3’3”). The most successful Paleozoic lineage of sharkapods, the SHELLSHARKS, solved this problem by instead developing an exoskeleton-like carapace from fused dermal denticles, forming stronger stiffer supports for their bodies and allowing them to grow several times bigger.

[Image: a descendant of the eel-like shark. It’s a mudskipper-like or amphibian-like animal, with four proto-legs, bulging gill pouches, and a colorful display fin supported by the spine on its head.]
The transitional stem-sharkapod Vexillispinus ambulopterygius

[Image: a descendant of the mudskipper-like shark, a worm-like animal with a long limbless body. A close-up view shows it head, with tiny vestigial eyes and its toothy jaws extended out like a goblin shark.]
Snapwyrms like Harpavermis gaphilus had long snake-like bodies and only vestigial eyes, detecting subterranean invertebrates with electroreceptors in their snouts. Their gills were reduced and most of their respiration took place through their moist naked skin.
Extending jaws with a slingshot-like motion allowed snapwyrms to rapidly snag their prey.

[Image: an armored sharkapod, a vaguely lizard-shaped animal covered in in armadillo-like carapace, with its limbs supported by an exoskeleton and serrated edges to its stumpy “feet”. Its head is still shark-like, and it has a small colorful “flag” fin on its head and bulbous “lunghorns” on the sides of its neck.]
Edaphoselachus sosai, a basal shellshark
Large pointed denticles on the ends of shellsharks’ limbs act like claws for traction.

Early shellsharks were still small carnivores or insectivores, and were not apex predators. Although their extensive carapaces proved useful to bear more weight and grow larger, the solid structure initially evolved as protection against the main predators in their ecosystems – huge arthropods such as griffinflies.

Later members of the group began to experiment with omnivorous and herbivorous niches, and by the Permian had become the largest terrestrial vertebrates of the Paleozoic. One of the very biggest species was Testudosquama avignatha, a 3m long (9’10”) herbivore with a voluminous plant-fermenting digestive system.

Sharkapods’ nostrils were blind holes and weren’t involved in breathing at all, instead using a bellows-like mechanism to actively pull in air for their sense of smell. In some species their snouts became quite bulbous, housing increasingly complex and sensitive nasal systems.

While both their lunghorns and nasal chambers were sometimes used to produce loud resonating sounds, most Paleozoic sharkapods’ hearing was poor, only able to hear low-frequency sounds in air and detecting them as much through ground-based vibration as with their under-developed internal ears. Visual communication was still prevalent, with the ancestral mobile flag-fins being retained on most species.

Extendable jaws remained a characteristic feature of sharkapods, swinging forwards to grab at food and then pulling it back into their mouths – although they were unable to chew and each bite had to be swallowed whole. Some of the herbivorous forms even fused their teeth into hard beaks to snip up tough vegetation.

[Image: a large armored shellshark with a vaguely tortoise-like body plan and a vivid black-and-orange color scheme. It has a bulbous snout, large lunghorns, a small flag-fin and a spiny tail. A close-up view of its head shows its beaked jaws extending.]
The giant shellshark Testudosquama avignatha