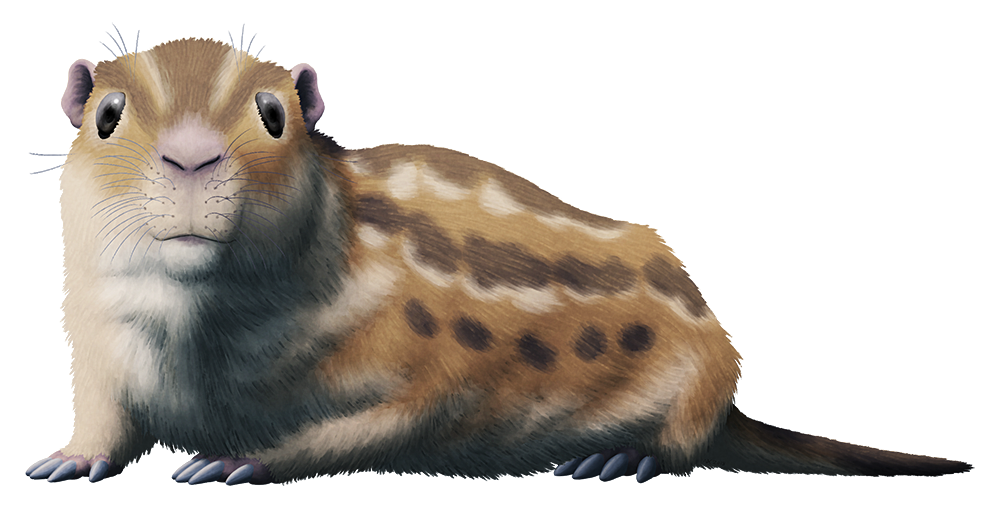 Known almost exclusively from the southern continents of Gondwana – hence their name – the gondwanatheres were part of a widespread and very long-lived group of mammals known as multituberculates.

Although multis resembled placental rodents, and gave birth to tiny undeveloped young in a similar manner to marsupials, they originated much further back in the mammal evolutionary tree. They existed by at least the Early Jurassic (~183 mya), and their ancestry may go even further back into the Late Triassic (~220 mya) if they were descended from haramiyidans.

Multis survived the end-Cretaceous extinction and became very diverse through the first half of the Cenozoic, until a combination of factors such as climate shifts, new types of vegetation, and the evolution of new mammalian predators (and possibly also competition from placental rodents) resulted in most of them going extinct by the Early Oligocene (~33 mya) – with only the gondwanatheres surviving past that point in the then-isolated continent of South America.

Patagonia peregrina was the very last known gondwanathere in the fossil record, living just 21-17.5 million years ago in the Early Miocene of Argentina. Although only teeth and jaw fragments have been found so far, it was probably about 15cm long (6″) and would have been a burrowing herbivore similar to modern gophers or tuco-tuco. Its ever-growing rodent-like teeth were adapted for grazing on tough grasses in its savanna-like habitat, and it would have lived alongside several other now-extinct types of mammal – but we’ll be getting to those ones later in the month.

Since it seems like these last gondwanatheres had survived by retreating into a rather specialized ecological niche, they sadly probably didn’t persist for very long beyond the time of Patagonia. A wave of extinctions associated with sudden climate cooling about 14 million years ago may well have been the final blow to the once-successful lineage of the multituberculates.