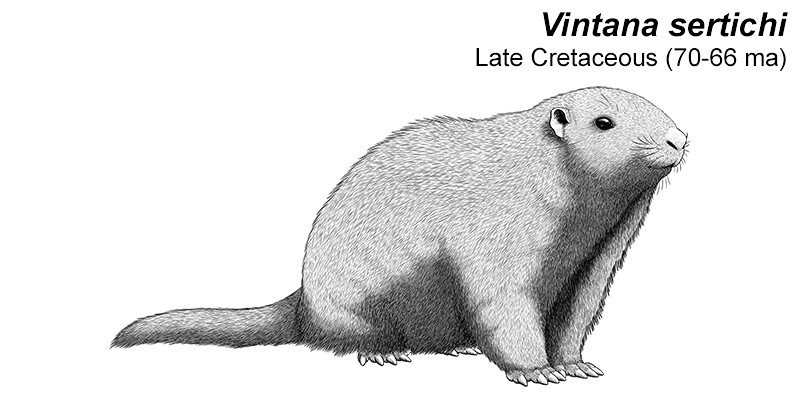 For a long time very little was known about a group of mammals called gondwanatheres. Named for their occurrence in the southern continents that made up Gondwana, they were represented only by fossil teeth and jaw fragments, and it wasn’t even clear what type of mammal they actually were. But recent discoveries of more complete skulls (and a currently undescribed full skeleton*) are starting to reveal more information, and we now know they were actually part of the multituberculates, or at least very closely related to them.

* described and named as Adalatherium in 2020

They were also the latest-surviving of the multis, lasting well into the Cenozoic with the youngest known fossils dating to just 17.5 million years ago.

Vintana lived during the Late Cretaceous of Madagascar (70-66 mya), and is known from a single skull. It was a specialized herbivore with rodent-like teeth adapted for chewing tough plants, seeds, and roots, and huge powerful jaw muscles attached to downward-extended cheekbones – a feature convergently seen in a few other mammals.

It was one of the largest known mammals of its time, estimated to have been at least 60cm long (2′). It had relatively large eyes, well-developed inner ears, and an expanded area of its brain associated with processing scents, all features that indicate it had very keen senses and may have been quite a fast and agile animal.