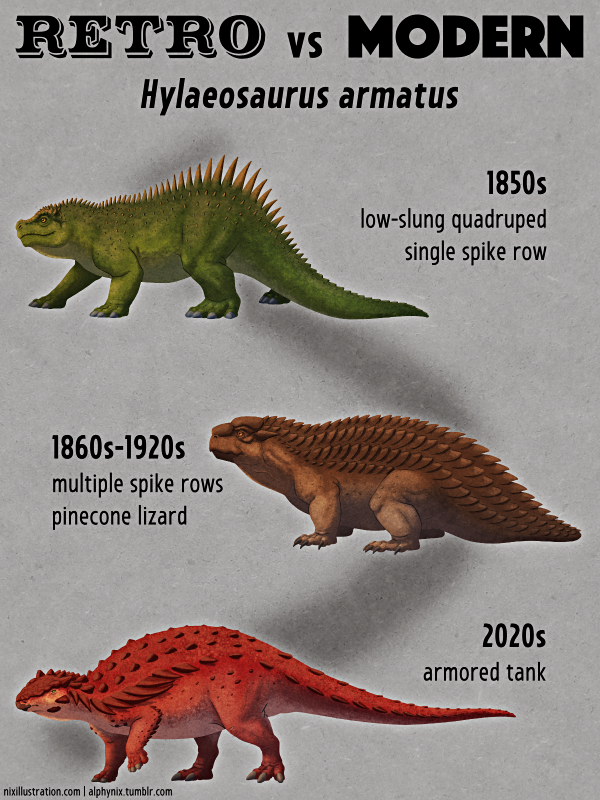 Despite being the third-ever scientifically named dinosaur genus, and being used in the first official definition of dinosaurs as a group, Hylaeosaurus armatus has ended up as a much less well-known name than Iguanodon or even Megalosaurus.

It was also the very first ankylosaur to be discovered, found as a partial skeleton in Southeast England in the early 1830s. Its large bony spikes were quickly recognized as being some sort of defensive armor, initially thought to be arranged in a vertical row along the animal’s back and tail.

The Victorian Crystal Palace statue of Hylaeosaurus is surprisingly decent for such an early attempt at reconstructing something as weird as an ankylosaur. It gives the impression of a slower and much more lizard-like animal than Iguanodon or Megalosaurus, showing it as a large squat quadruped with hoof-like claws and heavily armored scaly skin, with long spines running along its back and numerous smaller bony bumps over its head and sides.

Discoveries of other more complete armored dinosaurs began to give a better picture of what ankylosaurs actually looked like. But although Hylaeosaurus was soon recognized as having had multiple rows of spikes rather than just one, actual reconstructions of it seem to have been scarce during this period – mostly all derivative of a single 1869 image that depicted it as a sort of fat sprawling pinecone-lizard bristling with spikes.

Still only known from fragmentary material, Hylaeosaurus has remained rather obscure for a long time. In the 21st century it’s started to get a bit more attention, however, with the original specimen being further prepared and examined – and 2020 was Hylaeosaurus’ big year, with both a redescription of the genus being published and it also being featured on a special-edition British 50p coin.

Hylaeosaurus was probably around 4m long (~13′), and lived in southeast England about 140-136 million years ago. It may have also ranged further across Europe, with possible remains known from Germany and some more dubious records from France, Spain, and Romania. Generally classified as an early nodosaurid, most of our modern knowledge of what it would have looked like comes from other discoveries of much better-known ankylosaurian relatives, including some exquisitely well-preserved examples in the last few years like Borealopelta and Zuul.

It would have had a low triangular head, with a toothless beak at the front of its jaws and leaf-shaped teeth further back, and a pair of short horns on the back of its skull behind its eyes. Rows of spiky osteoderm armor ran along is body, with longer curving spines over its shoulders, all covered in thick keratin sheaths that would have made them look even larger in life. Numerous smaller bony nodules in its skin filled in the gaps between the armor, forming a tough protective shield over its entire back. Its short powerful limbs had hoof-like claws, and if it was indeed a nodosaurid its tail would have lacked the famous club of its ankylosaurid cousins.

Based on Borealopelta we even now know a little bit about the potential coloration and patterning of these animals – some of them were reddish-colored, with a countershaded camouflage pattern, darker on top and lighter on the underside.