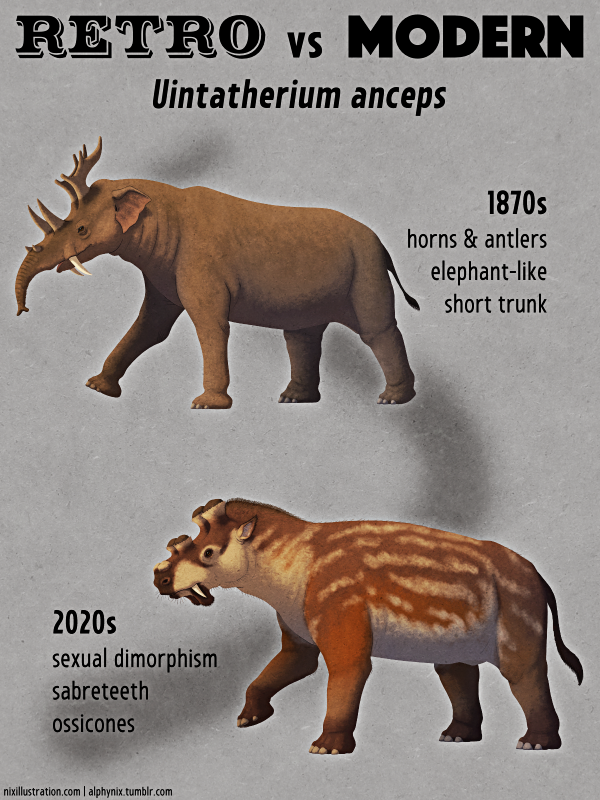 Discovered in the Western United States during the early 1870s, Uintatherium anceps was part of one of the earlier major conflicts in the the Bone Wars. Nearly 30 different scientific names were applied to various fossil specimens of this mammal in under two decades, and the taxonomic tangle wasn’t properly sorted out until nearly a century later in the 1960s when they were recognized as actually all being the same species.

Paleontologist Edward Cope considered Uintatherium (under the name “Loxolophodon”) and its close relatives to be proboscideans – part of the elephant lineage – due to some of the similarities in their anatomy. The first reconstruction of these animals showed this version, depicting elephant-like animals with downward-pointing tusks, short tapir-like trunks, and the multiple bony projections on their skulls speculatively shown as attachment points for large antler-like horns.

Cope’s rival Othniel Marsh heavily criticised that interpretation of Uintatherium, arguing that these huge mammals were instead a separate group within the ungulates named dinoceratans – although this wasn’t really as huge of a classification difference as it seems today, since at the time proboscideans were also considered to be ungulates!

The dinoceratan ungulate interpretation quickly won out, and for a while in the 20th century Uintatherium actually became a fairly popular and well-known prehistoric mega-mammal, commonly included in collections of cheap plastic “dinosaurs” and usually depicted as more of a knobbly-headed sabertoothed rhino.

In recent years the dinoceratans seem to have fallen into obscurity and some degree of paleontological neglect, with little modern work on the group and no major studies for the last couple of decades – although this might be starting to change.

Despite the early ideas about them being ungulates, the evolutionary relationships of dinoceratans have become much more murky over the last century or so. Due to different elements of their anatomy being highly convergent with various other mammals it’s easy to find “false positives” in morphological comparisons, and they’ve been proposed as being connected to a wide variety of groups including “condylarths“, “insectivores“, rodents, and cimolestans. But some mid-2010s research suggests they were in fact ungulates after all, closely related to early South American forms like Carodnia – a lineage whose own evolutionary relationships are murky, but may have close affinities with modern horses, rhinos, and tapirs.

We now know Uintatherium anceps lived across the Western and South Central USA during the mid-Eocene, about 46-40 million years ago, at a time when warm wet climates extended up into the Arctic and lush tropical-style rainforests covered much of the continent.

It was similar in size and build to a modern white rhino, about 4m long (13′) and stood around 1.7m tall at the shoulder (5’7″). It had three distinctive pairs of “horns” on its forehead, snout, and nose, that were similar in structure to the ossicones of giraffids, probably covered in skin and hair rather than keratin. Its elongated canine teeth were protected by bony flanges on its lower jaw, and seem to have been a sexually dimorphic feature that was much more prominent in males.

It also had an oddly concave skull, with its forehead dipping inwards, and an unusually tiny braincase for its size. It probably wasn’t a particularly intelligent animal, but it didn’t really need to be – as one of the first types of herbivorous mammal to get truly huge in the early Cenozoic, a fully-grown Uintatherium probably had no natural predators at all.