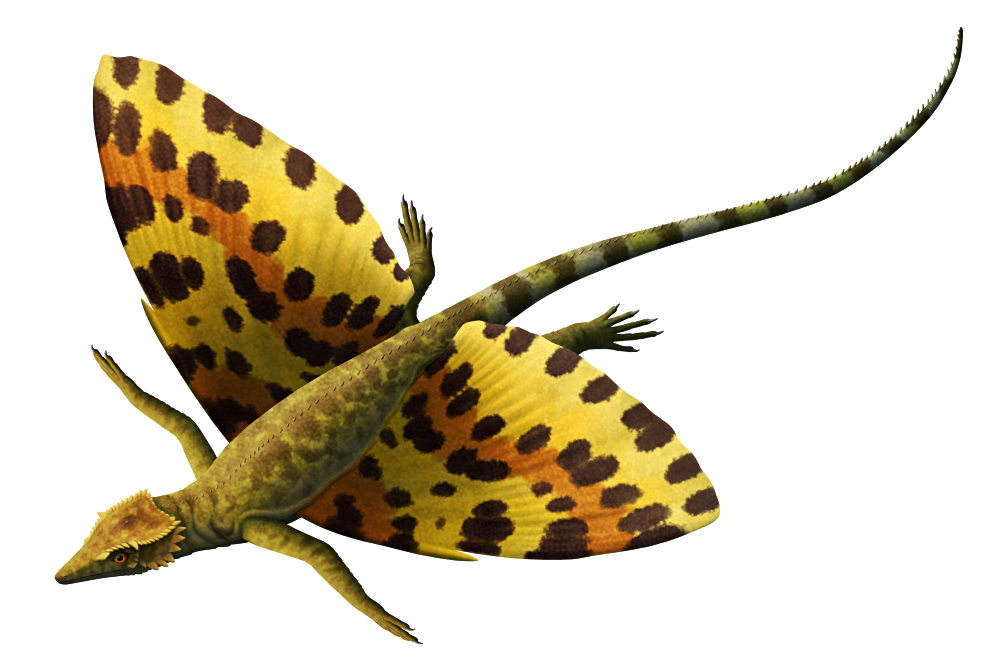 Remarkably similar-looking gliding reptiles have appeared multiple different times over the group’s evolutionary history, including the modern Draco – and despite being unrelated to each other almost all of them have achieved this in the exact same way, supporting their wing membranes on extremely elongated rib bones.

These early members of the neodiapsid lineage were the very first vertebrates known to have experimented with gliding, all the way back in the late Permian period 260-252 million years ago. And while they superficially resembled all the later rib-gliders, their wings were actually something never seen before or since in a gliding reptile.

Basically, these animals were the closest that Earth life ever came to legitimately evolving a dragon.

Coelurosauravus elivensis here was a weigeltisaurid living in what is now Madagascar, which at the time was part of southern Pangaea. About 40cm long (1’4″), its body was adapted for a life climbing and gliding around in the treetops, with pneumatized air spaces lightening its bones and long slender limbs similar to those of modern tree-climbing lizards.

Its large wings were formed from around 30 pairs of long hollow rod-shaped bones extending out from the sides of its belly. These flexible structures could furl and unfurl with a motion like a foldable fan, and are thought to have been highly modified from osteoderms in the skin, creating an entirely new part of its skeleton.

Towards the front of the wing the rods were arranged in several closely-packed “bundles”, and one specimen of Coelurosauravus preserves an impression of what seems to be the outline of the wing membrane’s leading edge – showing a stiffened pointed shape resembling the alula of a bird wing, which may have served a similar aerodynamic stabilization function.

But aside from the wings, the most striking feature of weigeltisaurids were their heads. Their skulls featured large crest-like frills resembling those of chameleons and ceratopsid dinosaurs, and their edges were adorned with prominent bumps and spikes. These were probably used for visual display and might have been a sexually dimorphic feature, with males having larger spikier crests than females. The crests may also have anchored large powerful jaw muscles, giving weigeltisaurids a wider gape and faster bite speed, helping them to snap up their fast-moving insect prey.