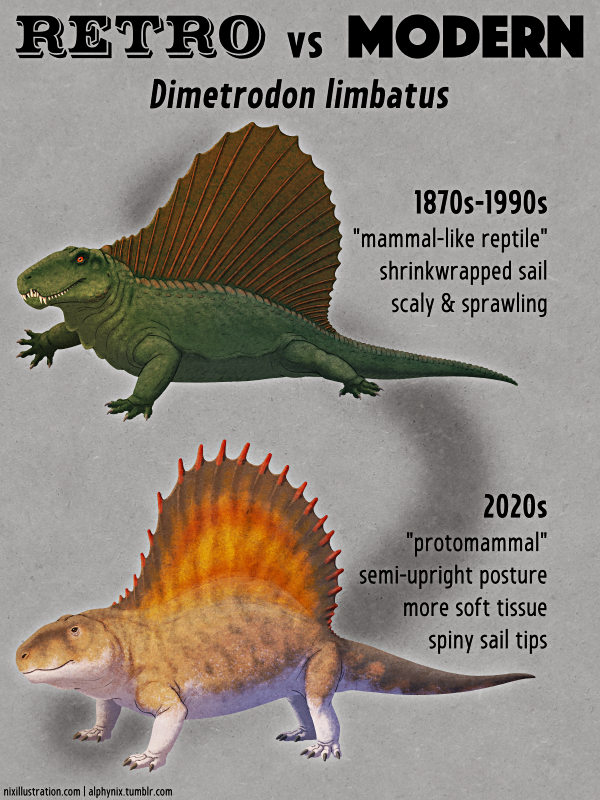 With its prominent sailback Dimetrodon is one of the most iconic prehistoric animals – and one that still frequently gets mistaken for a dinosaur, despite being closer related to modern mammals.

The first known Dimetrodon fossil was an upper jaw fragment found in Canada in the 1840s, but at the time this specimen was thought to represent a dinosaur. It wasn’t until the late 1870s that species like Dimetrodon limbatus (initially called Clepsydrops limbatus) from the Midwestern and Southern United States were recognized as belonging to a much older and different group of animals given the name “pelycosaurs“.

While some paleontologists did propose pelycosaurs as being ancestral to mammals quite early on, for several decades the prevailing view was actually that they were an ancient branch of rhynchocephalian reptiles closer related to modern tuataras. From the 1910s onwards pelycosaurs were finally linked back to mammals, with their similarities to the therapsids placing them as early members of the synapsid lineage – although all these early mammal-relatives were still considered to be derived from reptiles, and “mammal-like reptile” became a commonly-used term for them.

As a result reconstructions of Dimetrodon during this time period usually depicted a highly reptilian and heavily scaled lizard-like animal, with a sprawling belly-dragging pose, protruding crocodilian-like teeth, and a highly shrink-wrapped sail on its back modeled on those of some modern lizards. Some earlier images also showed a short stumpy tail, since Dimetrodon‘s longer tail proportions weren’t confirmed until the 1920s.

During the late 20th century new classification techniques led to the messy concept of “reptiles” being properly redefined as sauropsids, and synapsids being recognized as an entirely separate non-reptilian lineage of amniotes. Along with new studies and discoveries this has resulted in our understanding of Dimetrodon changing a lot in the last few decades, moving away from a heavily reptilian interpretation and instead letting it be its own weird “protomammal” thing.

We now know there were at least a dozen different species of Dimetrodon living during the early-to-mid Permian, about 295-272 million years ago. Most of them are known from North America, but an additional species discovered in Germany suggests this genus ranged further across Pangaea than previously thought.

Dimetrodon limbatus was one of the larger species, about 3m long (10′), and like other members of the genus it had a tall narrow skull with high-set eyes and two distinct types of teeth in its jaws. The structure of its nasal cavities suggest it had a good sense of smell, and like the related synapsid Ophiacodon it may have had a closer to “warm-blooded” metabolism than previously thought.

It would have had a very poor sense of hearing, however, and probably didn’t even have any visible ears on its head. It may have been functionally deaf to air-borne sounds entirely, only able to detect vibrations by pressing its lower jaw to the ground.

No skin impressions are known for Dimetrodon. Scaly reptile-like skin has been found on varanopids, a group traditionally classified as very early synapsids – but some recent studies have suggested they were actually part of the true reptile lineage, so their extensive scaliness probably doesn’t apply to synapsids like Dimetrodon after all. There is some possible evidence of rows of square or rectangular scale-like scutes on the underside of the belly and tail in pelycosaur-grade synapsids, but otherwise the next-closest known synapsid skin comes from the distantly-related therapsid Estemmenosuchus, which seems to have had smooth glandular skin similar to a hairless mammal.

The characteristic back sail, formed by highly elongated neural spines on the vertebrae, is now thought to have been covered in a different pattern of soft tissue than older reconstructions depicted. The texture of the bone along the spines’ length shows that at the base they were deeply embedded in the back musculature, then further up they were covered by skin webbing, but then at the tips they may actually have been unwebbed and free-standing, giving a much spinier profile.

While the sail was traditionally assumed to be used for temperature regulation, more recently this has started to seem less likely. The sail doesn’t seem to have been quite as well-supplied with blood vessels as previously thought, and there’s a lack of direct correlation between sail size and body size in different Dimetrodon species and age classes. Instead this structure may actually have been used for visual communication and display, and could therefore have been quite flashy and brightly-colored.

Fossilized trackways also suggest that Dimetrodon didn’t move with a low lizard-like sprawling gait but instead with something more like a crocodilian “high walk”, with its limbs much closer to upright. It was probably a fairly active terrestrial predator and would have eaten a wide variety of other smaller Permian animals, with its teeth having been found in association with the remains of the amphibians Eryops and Diplocaulus and the freshwater shark Xenacanthus.