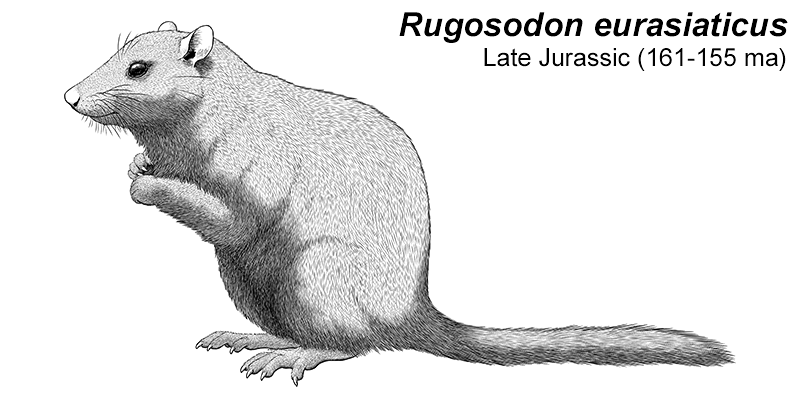 Moving on to the next major group of the theriiform mammals, we have the multituberculates – or “multis” for short.

First appearing in the Early Jurassic, about 183 million years ago (possibly descending from haramiyidans), multis were one of the most successful and long-lived mammal lineages of all time, found throughout the world and making up more than half the known mammal species in some fossil deposits. They even made it through the end-Cretaceous mass extinction and became even more diverse in the Paleocene, although shifts in vegetation, climate change, and the rise of new predators seem to have sent them into decline by the mid-Cenozoic. The last surviving group of multis, the gondwanatheres, finally went extinct in the Miocene (~17.5 mya).

Multis had rodent-like teeth, except with huge blade-like lower premolars, and likely occupied similar ecological niches to their modern counterparts. The structure of their pelvises also suggests they were some of the earliest mammals to give live birth to tiny undeveloped young, similar to marsupials.

Rugosodon is known from the Late Jurassic of China (161-155 mya) and is one of the earliest multituberculates represented by near-complete fossil remains.

About 25cm long (10″), it was a ground-dwelling chipmunk-like animal with highly flexible ankle joints that would have made it very a fast and agile runner, capable of navigating uneven surfaces. These specialized ankles were a defining trait of multis, allowing later forms to adapt to lifestyles ranging from tree-climbing to burrowing to jerboa-like hopping.

And while many later multis were primarily herbivores, Rugosodon’s teeth show it was an omnivore, indicating that a more generalized diet was ancestral to the group.