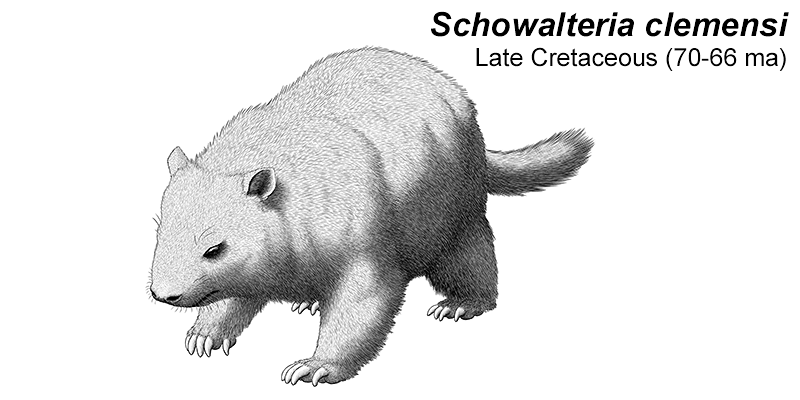 First appearing in the Late Cretaceous, a widespread and diverse group of mammals known as cimolestans were once thought to be early members of placental groups like pangolins and carnivorans. But more recent studies have shown them to be part of a different branch of the eutherian family tree altogether, more like cousins to the earliest placentals and leaving no living descendants.

However, they did make it through the end-Cretaceous mass extinction and were quite successful during the early Cenozoic, evolving into forms ranging from giant herbivores to fanged squirrel-like climbers to otter-like swimmers, with the latter surviving until about 33 million years ago.

One group of North American cimolestans, the taeniodonts, were specialized for digging up tough roots and tubers, with large claws, strong blunt jaws, and big front teeth that became ever-growing in some species.

Schowalteria was the earliest known member of this group, living during the Late Cretaceous of Canada (70-66 mya). Only represented by partial skull material, its full size is unknown – some estimates put it at a similar size to giants like Repenomamus, but it was likely closer to half that size at around 50cm in length (1′8″). Still one of the larger Mesozoic mammals around, but not nearly as big as some of the Cenozoic taeniodonts would later become.