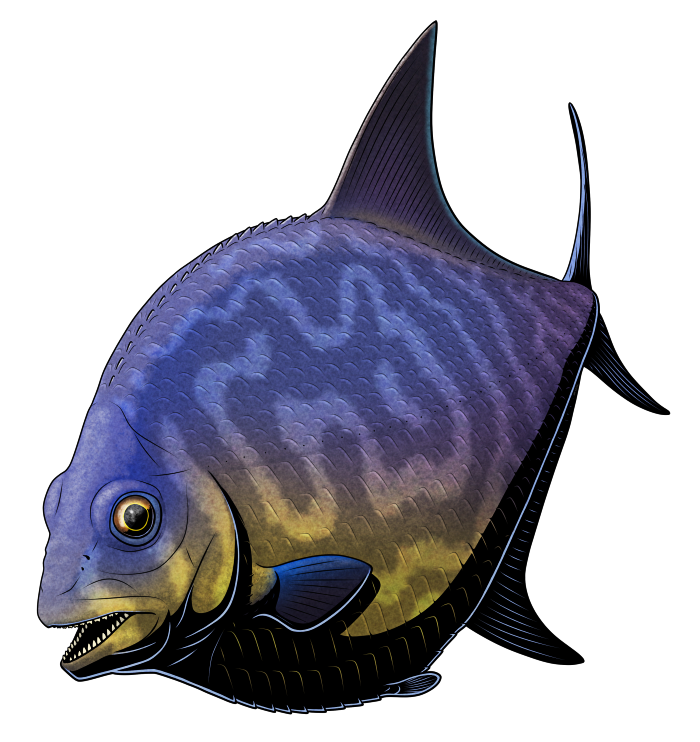 The pycnodonts were a diverse group of ray-finned fish that were found in shallow coastal waters from the late Triassic to the late Eocene (~215-37 million years ago). They usually had deep but very narrow body shapes with a disc-like appearance, convergently similar to modern reef fish like marine angelfish or butterflyfish – but some looked much weirder, with elaborate horns and spines, long snouts, or vertically-stretched bodies.

Most of them also had jaws full of round flat teeth used to crush hard-shelled prey, but some may instead have been herbivorous grazers similar to parrotfish.

And a couple of lineages even became carnivores.

Serrasalmimus secans lived in what is now Morocco during the late Paleocene, about 59 million years ago. Although only known from its jaws, the size of the fossil material suggests it was fairly large for a pycnodont, possibly around 80cm long (~2’8″).

It had sharp flesh-cutting teeth similar to those of modern piranha, but with a surprising evolutionary twist. Unlike any other known ray-finned fish, Serrasalmimus‘ teeth were true shearing carnassials anchored into bony sockets, with new replacement teeth forming directly below each current tooth – a very specific arrangement of features previously only known in mammals.

This is an especially remarkable example of convergent evolution because on land placental carnivorans were developing their own carnassials at the same time, just a few million years after the K-Pg mass extinction. Both mammals and pycnodonts were simultaneously taking advantage of the vacant predatory roles in their respective ecosystems, and ended up with incredibly similar tooth adaptations as a result.