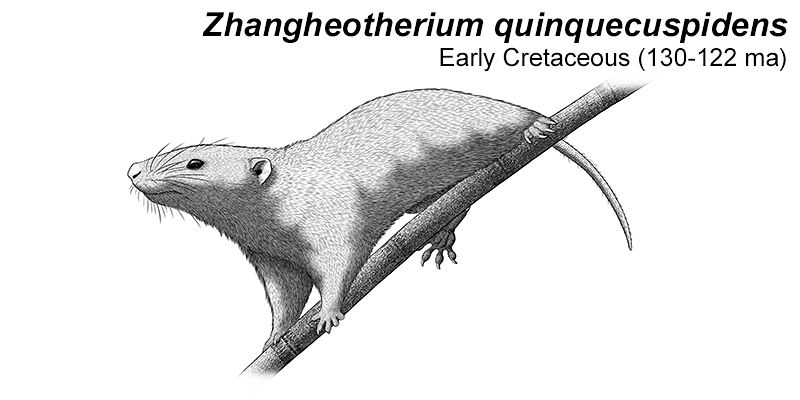 Now we move further along the theriiform branch of the mammal family tree, into a group known as the trechnotherians. This is the lineage that contains modern marsupials and placentals (therians) along with their closest relatives – including today’s subject, the symmetrodonts.

Symmetrodonts are known throughout most of the Cretaceous period, with one possible late-surviving member in the early Cenozoic. They were small mammals with distinctively-shaped teeth specialized for carnivorous and insectivorous diets, and their skeletons show an odd mix of therian-like and monotreme-like anatomy – although the more “primitive” features are thought to be due to either convergent evolution or an evolutionary reversion.

One species, Spalacotheridium noblei, is known from some especially tiny teeth, and may have been one of the smallest mammals to ever live.

At first symmetrodonts were known only from fossil teeth and jaws, but Zhangheotherium was the first to be discovered with a complete skeleton. Living during the Early Cretaceous of China (130-122 mya), it had a body length of 15cm (6″) – similar in size to a hamster – and a total length including the tail of about 25cm (10″).

It had spurs on its ankles that may have been venomous, and a more sprawling posture than therian mammals, along with limb proportions that suggest it was adapted for climbing.

It was sometimes preyed upon by theropod dinosaurs, as a specimen of Sinosauropteryx is known with Zhangheotherium bones in its stomach.