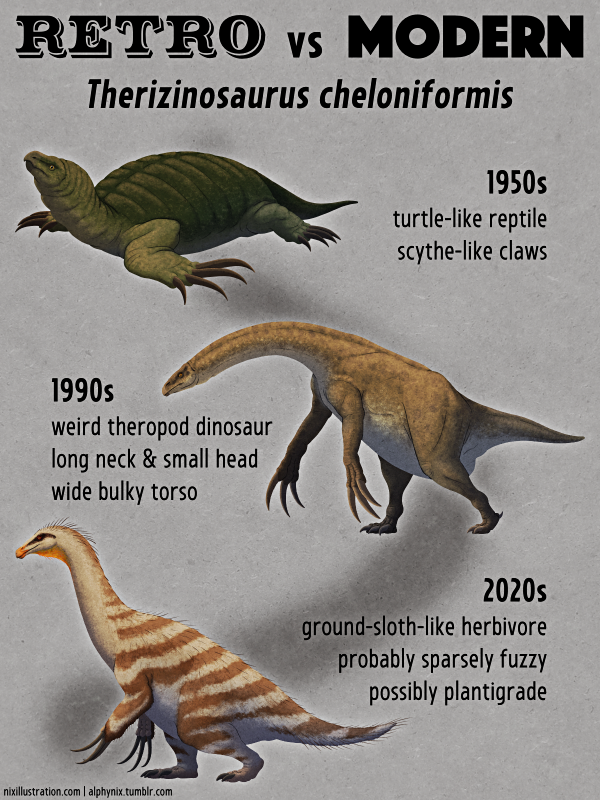 Therizinosaurs were some of of the most unique theropod dinosaurs. It’s only in the last few decades that we’ve started to understand much about them, and they’re still somewhat enigmatic even today.

The first known therizinosaur fossil discovery was Therizinosaurus cheloniformis, found in Southern Mongolia during the late 1940s and described and named in the mid-1950s based on a few fragments that included some unusually large and elongated claws.

These remains were interpreted as belonging to a giant turtle-like reptile that used its scythe-like claws to harvest aquatic plants – inspiring both parts of its scientific name, with Therizinosaurus meaning “reaper lizard” and cheloniformis meaning “turtle-shaped”.

The turtle interpretation began to be questioned during the 1970s, and the discovery of some slightly better (but still fragmentary) specimens reclassified Therizinosaurus as an unusual theropod dinosaur.

In the late 1970s and early 1980s fossils of another group of dinosaurs known as “segnosaurs” were also starting to be discovered, with a confusing mixture of anatomical features that seemed to link them to multiple different dinosaur lineages. As a result opinions about their evolutionary relationships varied during the 1980s, sometimes considering them to be theropods, sometimes late-surviving “relic” prosauropods, and sometimes a whole new major lineage of rare and weird saurischians.

Similarities between segnosaurs and the known material of Therizinosaurus were soon noted, and the discovery of the fairly complete Alxasaurus in the early 1990s confirmed that they were all part of the same group of bizarre herbivorous theropods – and the name “segnosaurs” was dropped in favor of “therizinosaurs”, since older names usually get priority in taxonomy.

Reconstructions of Therizinosaurus during this time tended to look rather weird and awkward. As with the majority of dinosaurs during this period it was depicted as entirely scaly and reptilian, and was often shown with a stiff hunched downcurving neck and an oddly tiny-looking tail.

Further discoveries during the 1990s finally began to clarify therizinosaurs’ evolutionary affinities, eventually placing them as an early branch of bird-like maniraptoran theropods, closely related to both oviraptorosaurs and the alvarezsaurs – and in 1999 the discovery of the small early therizinosaur Beipiaosaurus helped to confirm this relationship, revealing impressions of an extensive coat of filamentous feathers and longer stiffer quill-like structures.

Over the next couple of decades more and more therizinosaur fossils were found in both Asia and North America, and details about these dinosaurs’ appearance, biology, and ecology gradually became better understood. While there’s still a lot we don’t know about them, we do now at least have some fairly complete examples like Nothronychus, fossilized therizinosaur footprints, more feathers, an idea of Beipiaosaurus’ coloration (it was brown!), and even eggs and potential colonial nesting sites.

And while Therizinosaurus itself is still only represented by fragmentary and incomplete material, we now have a much better idea of what it was probably like. It lived in what is now the Gobi Desert during the Late Cretaceous, about 70 million years ago, and would have been both the largest known therizinosaur and the largest known maniraptoran dinosaur, estimated to have been as much as 10m long (33′) based on the proportions of its relatives.

It would have had a tiny head with a toothless beak at the front of its jaws, a long neck, and a wide bulky “pot-bellied” body housing its huge plant-fermenting gut. With its especially large body size it probably wasn’t as extensively feathered as its smaller relatives, but it may have still been sparsely fuzzy across parts of its body.

Unlike most other theropods it walked on all four toes of its feet, with the dewclaw enlarged into an extra weight-bearing digit. Recent analysis of footprints has also suggested that the larger therizinosaurs like Therizinosaurus may actually have been plantigrade, walking with their feet completely flat on the ground. This might turn out to just be an artifact of how the tracks were preserved, but therizinosaurs are certainly already weird enough that it could be a plausible interpretation.

But Therizinosaurus’ most distinctive feature was its hands, with extremely long narrow claws each at least 50cm long (1’8″). Unlike the strongly curved claws seen in other therizinosaurs, these ones were fairly straight for most of their length, only curving more sharply towards their tips.

While in the past these claws have been proposed as being weapons or digging adaptations, they were actually relatively delicate and were probably mainly used for pulling clumps of vegetation closer in a convergently similar manner to the later mammalian chalicotheres and ground sloths.

Therizinosaurus would have been a heavy slow-moving animal, and probably spent a lot of time sitting on its haunches supported by its especially robust hip bones while it browsed on large amounts of vegetation. It likely relied on its pure bulk and intimidation to deter potential predators, possibly even making aggressive displays with its claws when threatened – essentially it may have been a giant goose-sloth.