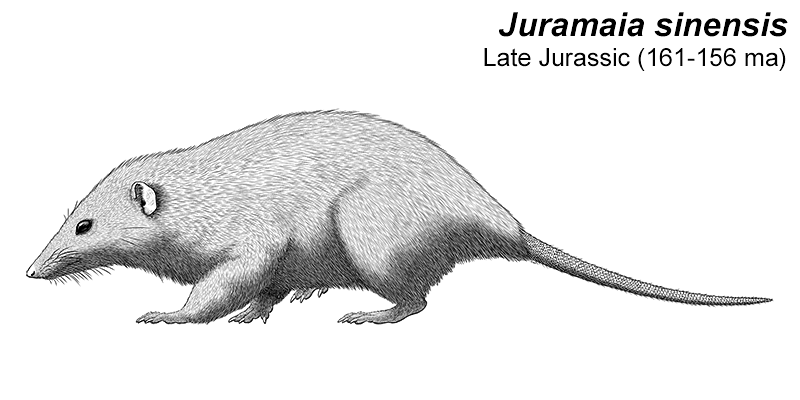 The other major branch of the therian mammals are the eutherians – represented today by only the placentals. But although the first eutherians split from their common ancestor with the metatherians all the way back in the mid-Jurassic, more then 160 million years ago, true placentals don’t seem to have actually appeared until right after the end-Cretaceous mass extinction.

There were many other side-branches of the eutherian lineage during the Mesozoic, however, and these last few days of the month will cover some of them.

(Some of these relationships are still under dispute, such as the exact position of leptictidans and Purgatorius and whether they’re actually placentals or not. Eutherian phylogeny is a bit of a mess.)

Juramaia was the earliest known eutherian, living during the Late Jurassic of China (161-156 mya). About 15cm long (6″), it was a shrew-like insectivore with limb anatomy that would have allowed it to climb up trees in a similar manner to modern rats.

Something very similar to it would have been the common ancestor of all later eutherians – suggesting that the earliest members of the group may have started out as tree-climbers before diversifying into different niches later on.

But despite it being closer related to living placentals than to marsupials, placental-style reproduction hadn’t actually evolved yet and it would have still given birth to tiny undeveloped young.