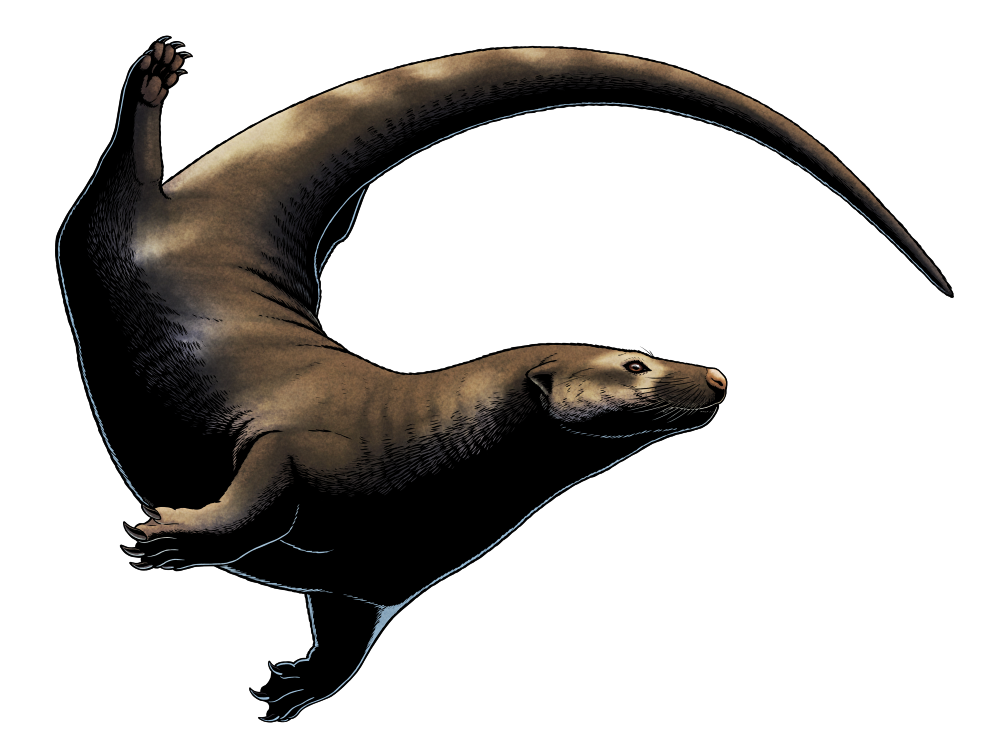 Cimolestans were one of the major mammal lineages that survived through the K-Pg mass extinction 66 million years ago. Closely related to early placentals, they had a burst of diversification during the first half of the Cenozoic and rapidly evolved into a wide range of specialized forms – some uniquely weird, and others convergently resembling more familiar modern animals like squirrels, bears, ground sloths, and hippos.

And one group known as the pantolestids were incredibly otter-like.

(Because synapsids love them some lutrinization.)

Palaeosinopa didelphoides here lived during the mid-Eocene, about 52 million years ago, in what is now the Mountain West region of the USA. It was similar in size to a small otter, about 1m long (3’3″), and had a streamlined body with a well-muscled neck, short powerful forelimbs, slightly longer hindlimbs, and a very long tail.

Inhabiting a subtropical lake ecosystem, it probably swam using both hindlimb paddling and otter-like tail undulations. Its strong jaws and teeth suggest it was specialized for crunching hard shellfish prey, but so far preserved gut contents have only shown fish bones and scales. Fairly large claws indicate it was also able to dig out burrows similarly to modern otters and beavers.

Although pantolestids were never particularly common animals they were quite widespread, expanding their range from their evolutionary origins in North America across to Europe and eventually into Asia. A cooling and drying climate at the end of the Eocene seems to have driven most of the group into extinction alongside all their other cimolestan relatives – but a few of the Asian species clung on slightly longer as the very last of their kind, with the last known fossils dating to about 28 million years ago in the early Oligocene.