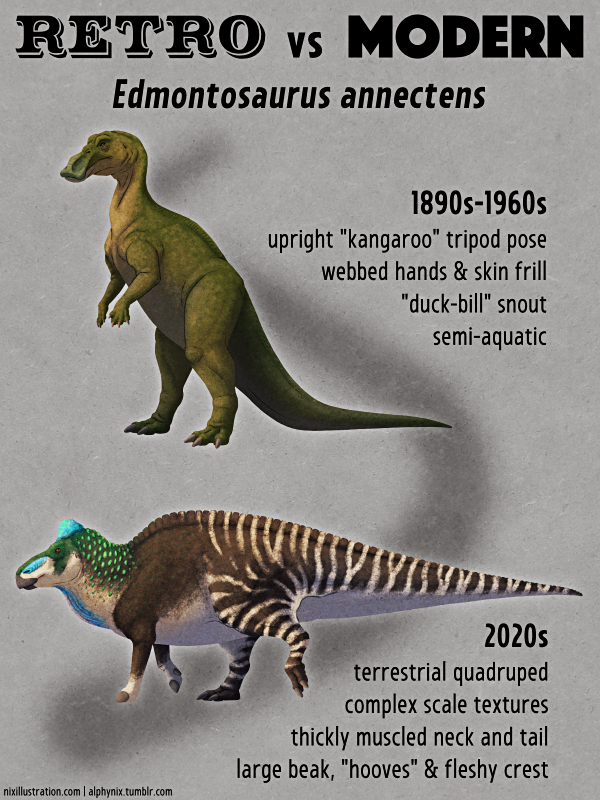 Hadrosaurs were first discovered during the 1850s in North America, with the eponymous Hadrosaurus being both one of the most complete dinosaurs known at the time and also the first dinosaur skeleton to ever be mounted and displayed.

Like many other dinosaurs of the time hadrosaurs were initially reconstructed as bipedal with an upright kangaroo-like pose. Early in the history of their study their wide flat “duckbill” snouts were thought to indicate they were semi-aquatic, and they were frequently portrayed swimming and wading while feeding on soft water plants.

While elaborately bony-crested hadrosaurs like Parasaurolophus have become some of the most famous and recognizable members of the group, the species that’s gone through the most radical changes in our understanding in recent years is probably Edmontosaurus annectens.

Edmontosaurus has had an especially messy taxonomic history with various specimens spending decades under many different names, commonly being labelled as Anatosaurus and Trachodon for much of the 20th century. For the sake of avoiding a lot of confusion I’m just going to keep referring to it here as “Edmontosaurus”, even though the naming issues weren’t properly sorted out until the 1990s.

The earliest specimen of what we know call Edmontosaurus was discovered in the 1890s, and the first to actually bear the genus name was the closely related species Edmontosaurus regalis discovered in the 1910s. For many decades it was mostly reconstructed in the then-typical “tripod” posture and seen as being highly aquatic, with an exceptionally well-preserved “dinosaur mummy” specimen being used to support that view – skin impressions around its hands were interpreted as paddle-like webbing used to swim.

The mummy also showed fairly thin and delicate skin, with a pattern of many tiny scales dotted with clusters of larger scales, and what appeared to be a fleshy skin frill running along Edmontosaurus’ neck and back.

The idea of amphibious hadrosaurs was finally challenged in the mid-1960s, at the start of the Dinosaur Renaissance, with details of their anatomy, possible stomach contents, and the environments that their fossils had been preserved in all being used to help reinterpret them as fully terrestrial herbivores that walked on four legs and ran on two. The discovery of Maiasaura nesting colonies in the late 1970s also revealed a lot of new information about the life history of these dinosaurs, and helped to popularize the image of them as social animals living in herds and caring for their young.

From the 1990s onwards new discoveries of additional “mummies” of both Edmontosaurus and other hadrosaurs have given us even more insights into the soft parts of their anatomy. Their necks and tails were much more thickly muscled and chunky than their skeletons alone suggest, the frill may have had a sort of rectangular segmented appearance, and the webbing on their forelimbs was actually more of a “mitten” that bound their hands into fleshy weight-bearing pads. And instead of a broad “duckbill” they actually had large hooked beaks covering their snouts, giving then more of a horse-like head shape.

We now know Edmontosaurus lived during the very end of the Cretaceous, about 73-66 million years ago, with the older part of that time range represented by Edmontosaurus regalis in Western Canada and the younger part represented by Edmontosaurus annectens in Western Canada and the Western and West North Central United States. It was one of the largest known hadrosaurs with most adult specimens around 9-12m long (~30-39′), but some of the very largest known partial remains suggest the existence of rare enormous “super-adults” that were about 15m long (49′).

Edmontosaurus was probably a grazing animal primarily eating tough low-growing foliage like horsetails, cropping off mouthfuls with its beak and then grinding them up with batteries of hundreds of teeth in the back of its jaws using a unique complex chewing motion.

Its skin had a complex texture of varying scale shapes and sizes across its body, and one mummified specimen of Edmontosaurus regalis shows a raised bumpy pattern of large scale clusters on its neck and a fleshy crest on the top of its head. It’s currently unclear if these were sexually dimorphic features and we don’t know if Edmontosaurus annectens actually had them too, but I’ve speculatively included them in this reconstruction anyway.

And despite being one of the most intensely-studied and completely known non-avian dinosaurs in the world, Edmontosaurus is somehow still continuing to surprise us. Parts of the mummy specimen nicknamed “Dakota” are still being carefully prepared, and in late 2019 the North Dakota Geological Survey teased an unexpected discovery – a large single hoof-like nail on the front of its hand, unlike anything ever seen before on a dinosaur, and suggesting that Edmontosaurus may have been much more specialized for purely quadrupedal movement than previously thought.

Official details on the “hoof” still haven’t been published yet, but whenever it happens it’ll be exciting to find out just what’s actually going on there.