The exact evolutionary relationships of the main groups of modern molluscs are rather debated, with several different proposed family trees. But one of the main possibilities is that there are two major lineages: the aculiferans and the conchiferans.

Modern conchiferans include slugs and snails, cephalopods, bivalves, tusk shells, and monoplacophorans – all groups that ancestrally have either a single-part shell or a two-part bivalved shell, with some lineages later becoming secondarily shell-less.

The ancestral conchiferans are thought to have been monoplacophoran-like molluscs, limpet-like with a cap-shaped shell, and likely diverged from a common ancestor with the aculiferans around the end of the Ediacaran. (But modern monoplacophorans probably aren’t “living fossil” descendants of early Cambrian conchiferans, and may instead be close relatives of cephalopods that have convergently become similar in appearance to their ancestors.)

Some of the earliest conchiferans were the helcionelloids, a lineage of superficially snail-like molluscs with coiled cone-shaped mineralized shells. They appeared in the fossil record at the start of the Cambrian (~540-530 million years ago) and lasted until the early Ordovician (~480 million years ago), and have been found all around the world as components of the “small shelly fauna“.

And while they’re usually tiny, only a couple of millimeters in size, they may actually represent juveniles or larvae – there’s evidence that at least some species grew up into much larger 2cm (0.8″) limpet-like adult forms.

END_OF_DOCUMENT_TOKEN_TO_BE_REPLACED 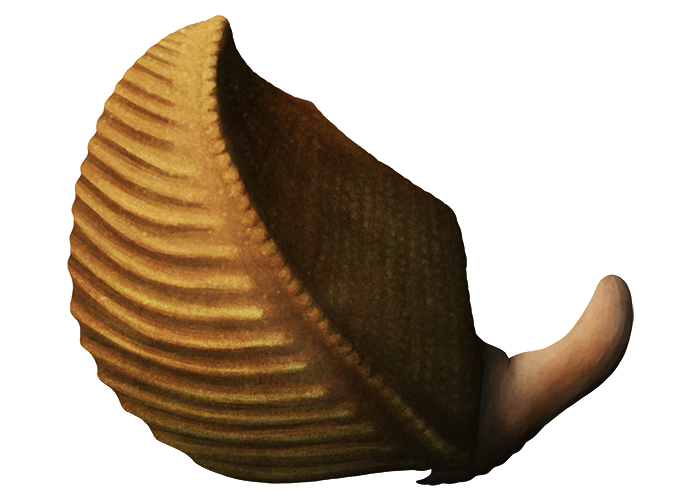 Trigonia was a genus of bivalve mollusc that first appeared in the Middle Triassic, around 245 million years ago. Part of a much older lineage (the trigoniidans) that originated over 400 million years ago in the Late Silurian or Early Devonian, and distantly related to modern freshwater mussels, these bivalves have been found in marine deposits all around the world.

Their triangular shells had complex internal hinges, and often featured elaborate patterns of ribs and tubercules (which may have been adaptations to increase burrowing efficiency) that made them very visually distinctive. They lived mainly in shallow coastal environments, and in some places their fossils are so common that they must have been very numerous animals in their ecosystems.

Trigonia costata was a species living in Europe during the Early-to-Middle Jurassic (~174-166 mya), around the time when the trigoniidans were exploding in diversity. Usually around 5-7.5cm in length (2-3″), it was one of the longest-lasting individual species of Trigonia and one of the most common at the time.

Along with their other trigoniidan relatives, various Trigonia species continued to evolve throughout the entire rest of the Mesozoic, and while almost all of them went extinct at the end of the Cretaceous a few did manage to hang on into the Cenozoic.

The last record of an actual Trigonia comes from Argentina at the very end of the Paleocene, about 56 million years ago. After a nearly 200-million-year run, this long-lived genus finally disappeared – but although Trigonia itself was gone, that wasn’t quite the end of the trigoniidans altogether.

A single remaining lineage quietly continued on all the way into modern day, either descended from one of the Trigonia species or very closely related to the genus, living in waters off the coast of Australia and Tasmania. Known as Neotrigonia, they’re not quite as elaborately ornamented as some of their ancient relatives, but their complex shell hinges give them away as the only living trigoniidans – and their anatomy can give us some hints about what Trigonia’s soft tissue parts may have looked like, such as the presence of an unusual boot-shaped muscular foot that helps them burrow rapidly into the seafloor.