The only Cambrian fossil species that seems to be closely related to the entoprocts is Cotyledion, but there are several other enigmatic animals that have also been tentatively allied with the group as members of early stem lineages.

END_OF_DOCUMENT_TOKEN_TO_BE_REPLACED 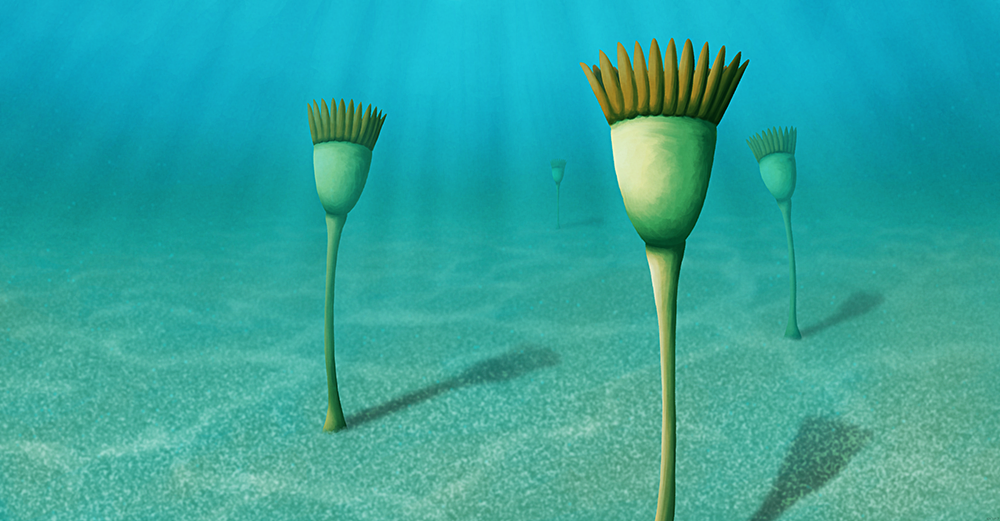 Dinomischus isolatus, an enigmatic animal from the mid-Cambrian Burgess Shale Formation in British Columbia, Canada (~505 mya). Only about 2cm (0.8″) in total length, it had a soft cup-shaped body topped with a whorl of about 20 solid plate-like “petals”, and lived attached to the seafloor by a thin stalk.

Impressions of its internal anatomy show the presence of a U-shaped gut, with its mouth and anus positioned next to each other in the center of the “petals”. It probably fed in a similar manner to crinoids, filtering small particles of food from the surrounding sea water.

But what type of creature it actually was is still unknown. Although comparisons have been made with several different groups – particularly the tiny entoprocts – Dinomischus doesn’t seem to quite fit in anywhere.

Despite this ongoing mystery, a few other similar fossils have been found that seem to be its relatives. Specimens of another species of Dinomischus from slightly older deposits in China show different “petal” shapes, and have been named as D. venustum. Another Burgess Shale animal called Siphusauctum gregarium may also be closely related.