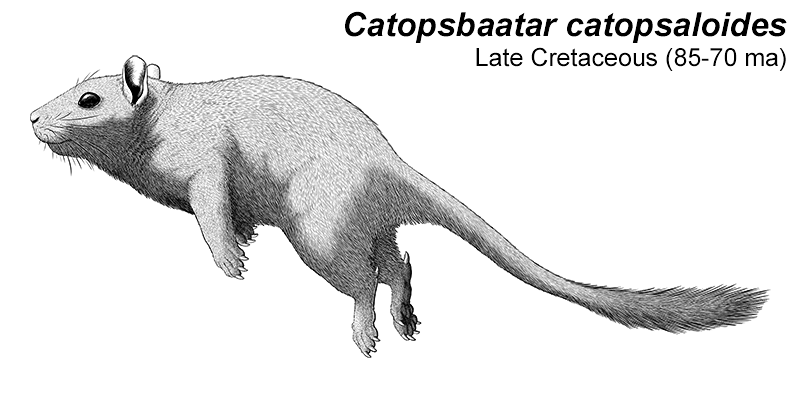 Known from the Late Cretaceous of Mongolia (85-70 mya), Catopsbaatar was a fairly large multituberculate, similar in size to a modern chinchilla at about 40-50cm long (1′4″-1′8″) with about half of that length being its tail.

It was part of a group of Asian multis called the djadochtatheriids, which lived alongside famous dinosaurs like Velociraptor in a sandy desert environment. They were mostly jerboa-like animals capable of bipedal hopping – although one member of the group, Mangasbaatar, was a burrower instead.

Although Catopsbaatar had features in its vertebrae and hindlimbs convergently similar to those of modern hopping mammals, the somewhat more sprawling posture of multis mean it wouldn’t have jumped in quite the same way. It may have actually launched itself upwards at a steeper angle, in a manner a little more like a frog.

Djadochtatheriids weren’t the first hopping Mesozoic mammals, however, since fossilized footprints are known from both the Mid-Jurassic of South America and the Early Cretaceous of Korea. We don’t know what types of mammals made these tracks, or what they looked like, but they show that similar styles of locomotion may have evolved multiple times in early mammals.