Cephalopods‘ highly distinctive body plan and incredible intelligence make them some of the most charismatic marine animals. Today they’re mainly represented by the soft-bodied coleoids (octopuses, squid, and cuttlefish), with the modern giant squid and colossal squid being the largest living invertebrates. In comparison the shelled nautiluses seem like weird oddballs, but they’re actually far more typical examples of the group than their squishier cousins – as part of the conchiferan lineage the ancestors of all modern cephalopods were also shell-bearing molluscs, and for much of their evolutionary history shelled forms like ammonites and orthoceridans were extremely abundant.

The exact evolutionary relationships of cephalopods within the conchiferan family tree aren’t clear, but their closest relatives might be modern monoplacophorans and they probably descended from limpet-like “monoplacophoran-grade” ancestors in the early Cambrian. The current oldest potential cephalopod fossils come from about 522 million years ago, but the first definite cephalopods in the fossil record come from much later in the period.

END_OF_DOCUMENT_TOKEN_TO_BE_REPLACED 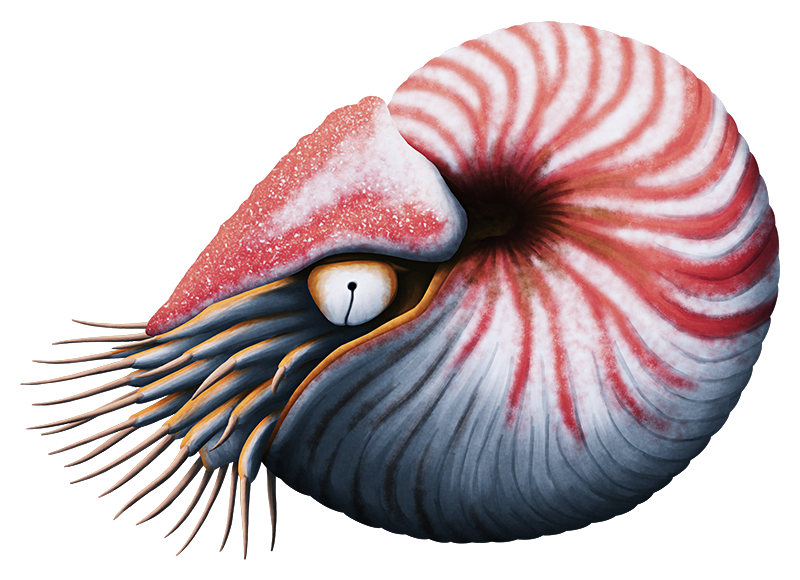 Nautiloids are represented today by just two living genera (Nautilus and Allonautilus), but they have a lengthy evolutionary history going back almost 500 million years.

The peak of their diversity was during the first half of the Paleozoic, with many different shapes of shells from coiled to straight, then they began to decline when their relatives the ammonites and coleoids appeared and began to compete for similar ecological niches. Although a few groups of nautiloids survived through the end-Permian mass extinction, most of them had disappeared by the end of the Triassic, leaving just one major remaining lineage known as the Nautilina (or Nautilaceae).

During the mid-to-late Jurassic (~165 mya) two new groups split away from the ancestors of the modern nautiluses – the cymatoceratids and the hercoglossids.

Cymatoceratids such as Cymatoceras sakalavum here had shells with a ribbed texture. Living during the Early Cretaceous, about 112-109 million years ago, this particular species is known from Japan and Madagascar and could reach a shell diameter of over 15cm (6″).

Hercoglossids, meanwhile, were much more smooth in appearance, but both groups also had more complex undulating sutures between their internal chambers than modern nautiluses do.

These nautiluses made it through the end-Cretaceous mass extinction and had a brief period of renewed success, filling the ecological roles left vacant by the extinct ammonites. But by the end of the Oligocene (~23 mya) both the cymatoceratids and hercoglossids vanished, possibly unable to deal with cooling oceans and the evolution of new predators.

Some of the hercoglossids’ Cenozoic descendants, the aturiids, managed to last a little longer into the Early Pliocene (~5 mya) before another period of cooling seems to have finished them off. Past that point, all that was left of the once-massive nautiloid lineage were their cousins the nautilids, who gave rise to today’s few living representatives.

(It’s also worth noting that the classification of the cymatoceratids seems to be in flux right now. Some paleontologists currently don’t consider Cymatoceras itself to actually be part of the group, instead being a nautilid much closer related to modern nautiluses. If this is the case then the cymatoceratids may not have actually survived past the Late Cretaceous – but the Cymatoceras genus alone still counts as an “almost-living” fossil since its various species ranged from the Late Jurassic to the Late Oligocene.)