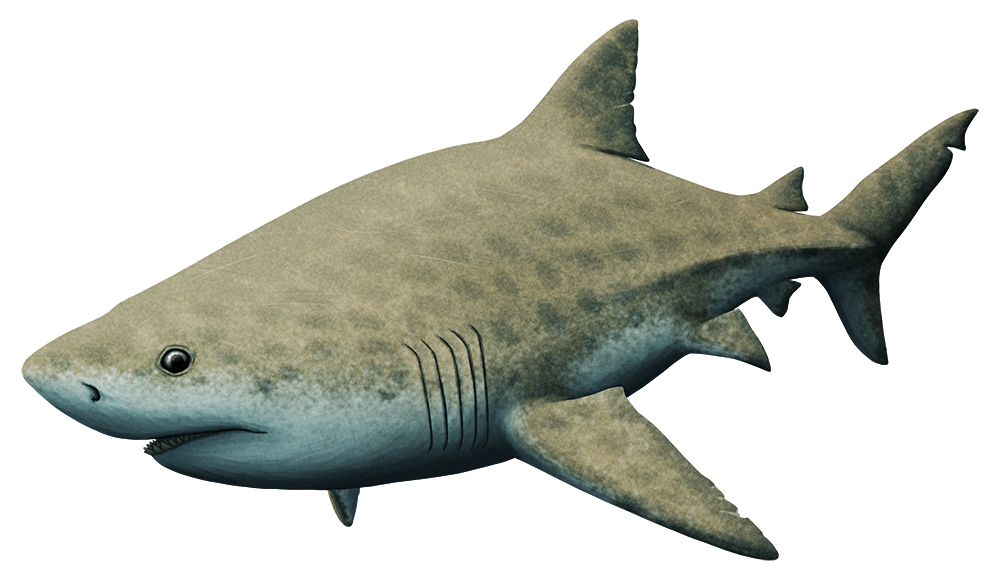 For the final entry this month, let’s look at a particularly famous lineage: the megatooth sharks.

More formally known as the otodontids, the megatooths were a group of sharks that first appeared in the Early Cretaceous, about 115 million years ago. They were a branch of the mackerel shark lineage – making them evolutionary cousins to a variety of modern species like the great white shark, basking shark, and goblin shark – and had a near-worldwide distribution, with fossils known from every continent except Antarctica.

Early otodontids in the Cretaceous were usually small-to-medium sized, around 2-3m long (6′6″-9′10″), but after surviving through the end-Cretaceous extinction they took over the marine apex predator niches left vacant by the vanished mosasaurs and plesiosaurs and began to get very big. Species of Otodus in the Paleocene and early Eocene may have reached sizes of at least 9m long (29′6″), twice the size of an average great white.

Their teeth gradually became proportionally larger in their jaws, losing their side cusplets and taking on a chunky triangular shape with finely serrated edges. This gave them an incredibly powerful bite force, and they would have probably fed on pretty much any other large marine vertebrates they could catch, including bony fish, smaller sharks, turtles, and early penguins – and then when marine mammals like early whales and sirenians appeared in the mid-Eocene, they adapted to this new food source too.

By the Late Eocene (~35 mya) the Otudus lineage was still developing even chunkier and more serrated teeth, and by the Early Oligocene (~28 mya) Otodus chubutensis reached even larger sizes rivaling the modern whale shark at around 12m long (39′4″).

But the most well-known member of the group evolved just a few million years later in the Early Miocene (~23 mya) – the absolutely enormous “megalodon”.

There’s some debate about what genus name megalodon should be assigned to – at the moment its formal name is usually considered to be Otodus megalodon, but some paleontologists place it in Carcharocles or Megaselachus or Procarcharodon instead. Whatever you want to call it, it was a ridiculously big shark – size estimates range up to about 18m (59′), which would make it potentially the largest fish to have ever lived.

Since these huge sharks are all known mostly from just their fossilized teeth (and occasionally a few exceptionally preserved cartilaginous vertebrae), it’s hard to tell what they actually would have looked like in life. Megalodon is frequently depicted as simply a scaled-up great white, but it’s unclear how accurate that really is – it may have convergently resembled a giant great white due to their similar predatory habits, or it could have had a build more like the larger basking shark or whale shark.

A preserved megalodon skull has actually been found, but no studies of it have been published yet. It might give us some important clues about the head shape of this giant shark, but until there’s some official information all we can do is continue to speculate.

Megalodon was a highly successful species, living all around the world in warm and temperate ocean waters for around 20 million years. Its teeth have been found in association with the bones of many different smaller whale species, suggesting it frequently ate marine mammals, and the patterns of the bite marks indicate it probably used different hunting strategies than modern great whites. Some whales seem to have been heavily rammed and then had their ribcages bitten into, targeting their hearts and lungs, while others had their flippers ripped off to immobilize them.

During the Pliocene (~5-2.6 mya), however, megalodon began to struggle. Cooling oceans and changes in the abundance of the marine mammals it ate began to restrict its available prey. Baleen whales started to grow too large for it to effectively hunt, since it preferred to target smaller species, and they also shifted their ranges towards the cold polar waters that megalodon didn’t seem to be able to survive in. In addition, dropping sea levels may have destroyed most of its shallow warm-water nursery sites, making it harder for newborn young to survive into adulthood.

By the end of the Pliocene, somewhere between 3.6 and 2.6 million years ago, megalodon went completely extinct. Despite some very pseudoscientific claims, there’s definitely no living “Meg” out there anymore – if there was, we’d be constantly finding freshly-shed teeth and whales with giant bite marks on their bodies!